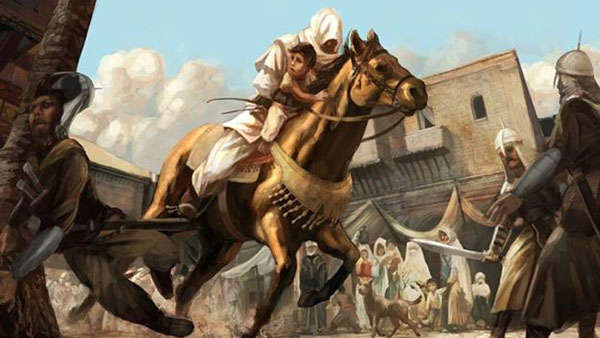 With Assassin’s Creed Syndicate, Ubisoft managed to bring the series back to the level of quality one would expect from such a top developer and publisher, but the users’ fatigue has prevented it from being the huge hit it may have deserved to be. This is the reason why the French company is apparently letting Assassin’s Creed skip 2016 and come back next year with some sort of reboot. Assassin’s Creed Empire, this is rumored to be the title of the new Assassin’s Creed game, could be set in Egypt and feature a “The Witcher 3: Wild Hunt feel” and a new freeflow combat system. The game is said to be in development at the same team which brought to us one of the most interesting AC to date, the fourth main episode Black Flag.

Discussing about the new game in the Assassin’s Creed series, we at Gamepur ended up being really curious regarding that The Witcher 3 reference in the latest rumors: what could Assassin’s Creed possibly borrow from the last adventure with Geralt of Rivia as the protagonist? That’s why we had a quick chat and determined which are be the five things Ubisoft should get from the CD Projekt RED game and carry over Assassin’s Creed Empire: let’s take a look at them.

Setting is one of the most interesting things in Assassin’s Creed as a series, the one thing, perhaps, which Ubisoft cares about before anything else is put on the table. But it looks clear at this point that, at least in terms of story, the team is struggling to keep locations and eras realistic while trying to focus on a sort of historic tourism and situations which grab a lot from fantasy.

Egypt looks a great solution to completely reboot the franchise and bring it back to the times when Altair was supposed to be a Prince of Persia’s bodyguard. That could help Ubisoft take a decision in jumping onto the fantasy train, renouncing at some elements of realism (that currently are not leading anywhere), and bring in some “magic”, or a mysterious component, we have explored while playing The Witcher as a series and embarking onto the quest to becoming a powerful Witcher.

Assassin’s Creed usually features interesting side contents with funny interpretations of really existed characters (Bell or Marx in Syndicate are a good example of that), but people who knows the series those are too predictable. You can always say you are not playing something which will be useful in developing the story or the series’ lore, since those contents are distinct and pretty different from the main campaign ones.

The Witcher 3: Wild Hunt, on the other hand, really has what it takes to offer users contents which are always meaningful anytime and anywhere – it is more correct, in fact, to talk about “side questlines” rather than simple side quests. Should I mention the Bloody Baron side story to tell you what I mean? That quest turns to be side all of a sudden, while retaining its sky high and main quest like level of quality, and players can’t be but surprised by looking at such a care from the developer.

Like for the setting, it is hard to see a future for the Assassin’s Creed series until Ubisoft sticks to the real existed side characters. While those are fascinating and provide realism to the selected locations, they prevent developers from expressing their creativity and result in weak or too predictable characters leading to even more predictable quests, blocking possible developments of the story and of the series story arc.

Creating deep and meaningful fantasy characters to be both of support and obstacle to the main protagonist is the right thing to do and, while it partially has already happened with Assassin’s Creed Syndicate, this is something The Witcher 3: Wild Hunt was able to achieve – The Wild Hunt, Ciri, Yennefer, and more… Ubisoft should really take its time to try and work on fictional characters to give this series a brand new start.

Story, finally. It is something we already said needs to be completely rebooted since, as it is now, it is not leading anywhere. From Black Flag to Syndicate, Ubisoft keeps saying this is an entirely new story arc but even hardcore fans struggle to see where all of the things being told so far are carrying them and the Templar vs Assassins long fight. Assassin’s Creed was supposed to be the end of a trilogy but failed to offer the answers gamers wanted by just looking at the first games. Now it is time to take everything good was told in both the story arcs and mix it up in a new beginning, with a plan which is clear from the very start and goes beyond the historical tourism Ubisoft has been striving to provide gamers who don’t want it anymore.

CD Projekt RED has just ended its first trilogy so it is hard to predict where The Witcher franchise (which will keep living after Geralt of Rivia) will go in the future, but they have proven so far they know from the first moment what they are doing and many, if not each and everyone, of the answers people wanted from the franchise have arrived in Wild Hunt. That could be a good example for Ubisoft, if they want to finally make things right.