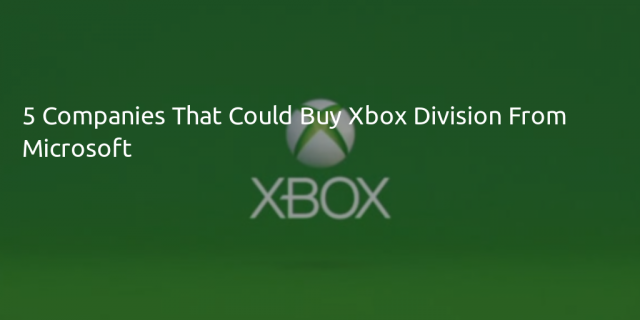 Pre-GDC 2015 rumors about Microsoft selling Xbox are back to life, even though they’ve been debunked more than one time. In a recent feature published by GamesIndustry International, Rob Fahey states that the operation could still be completed and we have a few clues about that. First of all, Microsoft’s shift back to PC gaming thanks to Windows remote play with Xbox One.

The platform holder has indeed started the process to bring Windows 10 kernel on Xbox, so it would be very easy for it to keep providing software and services (Azure for Xbox Live, i.e.) after the sale: that would respect Steve Ballmer’s vision for Microsoft, in his opinion, destined to evolve in a company of services. Furthermore, Xbox One sales seem to satisfy the giant of Redmond only in the United States and this could be potentially harming the good opinion that Satya Nadella had of the gaming division.

With that said, who or what company could buy Xbox? Rob Fahey brings on some of the names we already heard in the past rumors, that could be possible but not completely convincing: Amazon, Apple, Google. We’re adding the for that matter: Facebook and Electronic Arts.

At a certain point in the last year, Amazon looked quite a good bet for those who were suspicious about the selling of Xbox. The ecommerce needed to extend its range of products, at that time limited to Kindle, and had enough economic power to try and acquire Microsoft’s gaming brand. We don’t exclude there have been talks about that, or at least a demonstration of interest by Amazon, but now we know for sure that Microsoft has not accepted offers, if any.

What about now? The situation in Amazon has pretty changed since those days, with a range of smartphones and set-top boxes already launched. Even though those have not been much appreciated by critics and public, Amazon could be trying and supporting both of them for a bit more time, just not to waste the investment done so far. That means no Xbox in the short and medium period.

Apple’s situation looks pretty different. Tim Cook has so far showed a certain openness in regards of video games, but from an external point of view. What Apple has done so far with its devices and services seems the attempt to not make any obstacle to hits like Angry Birds or its clone Flappy Bird, more than the acts of a company that truly believes in the gaming business. Moreover, you should not forget that Apple has made its name thanks to elitist products such as iPhone and iMac; it’s true that recently things have slightly changed because of business and competitors, but Xbox is so much pop.

Google could buy the entire world, and probably will, if they wanted. So it’s obvious its name is in this list… but there’s something more. Google’s portfolio includes smartphones, tablets, laptops and services, so it could be a perfect “partner” for Xbox and Xbox could be the icing on Google’s cake. What’s not convincing is Mountain View’s approach to acquisitions: they bought Motorola, took the Lenovo. Are we sure is this what the video games industry needs?

With Facebook’s gaming offer slowly decaying, I wouldn’t exclude a renewed interest from Mark Zuckerberg and a last attempt to try and enter the video games industry. Oculus Rift is almost here and it could be an exclusive addition to Xbox’s portfolio, and a good replacement for the HoloLens project (even if it has a slightly different purpose). As a gamer, I enjoyed the way Facebook managed that acquisition and I wouldn’t make any opposition if this finally ends up being true: Phil Spencer and the other good guy from Xbox division would retain their positions, and that could be only reassuring about Palo Alto’s company proposition for it.

I don’t think Electronic Arts could buy Xbox at this point of its lifecycle, anyway there’s been a moment when they could truly think about it, just before Pandemic Studios were closed. From that point, the economic hardship began and EA preferred to keep a low profile regarding investments and a tighter portfolio.

So, when I say “Electronic Arts” I mean a company that is already in the gaming area, that could take charge of Xbox and make it an exclusive affair of its own brands. That could be Ubisoft, Activision or even Take-Two, and this definitely is the most fascinating (and unrealistic) hypothesis Xbox. But what if I said “Valve”… ?