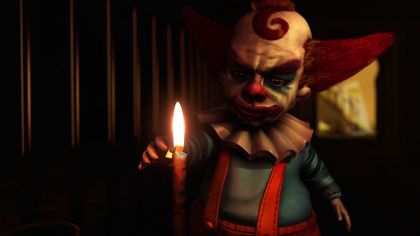 Bloober Team’s Basement Crawl, a maze-based action title with some strategic elements is available now exclusively for Playstation 4. The gameplay is pretty unique and revolves around setting up traps to hurt other players. The game is completely focused on traps, however Bloober Team has added basic single player campaigns with bots to fill in for missing characters.

We recently got in touch with Aron Cender, Marketing Manger Bloober Team to know more about Basement Crawl, inspiration behind it, key areas PS4 owners must play, PS4’s power, resolution and many more things. Read on to find out everything you need to know about Basement Crawl.

Gamepur: Tell us about Basement Crawl, how excited are you about it?

Aron Cender: Very excited. We were working really hard to make a good and fun to play game for Playstation 4, so we hope players will like it. We also got a couple of tricks up our sleeve, but I can’t talk about them yet 😉

Aron Cender: Our main goal was to combine an exciting and addictive multiplayer experience with some creepy, dark mood. We believe that atmosphere is a very important part of game design, even in games like Basement Crawl. We could go for something standard, but it’s not our way. We prefer weird stuff.

Gamepur: Which are the key areas of Basement Crawl that gamers should lookout for?

Aron Cender: Local multiplayer for sure. At this moment there are not that many titles for Playstation 4, that will allow to play and have fun with your friends in the same room. We put a lot of effort into making it the best experience possible, so I hope gamers will enjoy it as much as we do. Also a couple of new features coming very soon, so look for our announcements in the future. Other thing is that you don’t need to buy a second controller, you can just use your PS Vita if you have one.

Gamepur: To some extent gameplay looks pretty similar to Bomberman, what are the additional features/things that make Basement Crawl exciting and challenging?

Aron Cender: It’s way faster and skill-based. Some of gameplay mechanics require perfect timing and coordination, so it’s not gonna be easy. If you meet a more skilled player online, he will win 100% of the times – there is no luck or pay-to-win factor. Also, adding four different characters makes a game more diverse, as their playstyles are unique.

Gamepur: Basement Crawl will feature “Four Classes”, can you name them and provide details i.e unique abilities and more?

Aron Cender: So, we have the Girl, who is fast and sneaky, thanks to faster stamina regeneration. The Wrestler is the tank – she has more health points, than other classes. The Clow has range advantage from the very begining and the Dummy can spam more bombs. Every character plays differently, so you can choose the one, that fits you best.

Gamepur: Since Basement Crawl is a PlayStation 4 exclusive, should we expect full use of stunning features of DualShock 4 controller like Touchpad, Lightbar?

Aron Cender: We use some of them, like Lightbar for example, but we focused more on the actual gameplay, instead of pushing for features, that aren’t that important.

Gamepur: 1080p resolution was officially confirmed for Basement Crawl, but FPS figure was said to be “Work In Progress”, now that we are so close to the launch can you provide the final resolution figure?

Gamepur: Any plans for transporting Basement Crawl to Xbox One or Nintendo Wii U?

Gamepur: Bloober Team describes its self as “game developer whose games are famous for their high difficulty level and demanding gameplay.” What do you think was the landmark which helped you gain this reputation?

Aron Cender: I think the A-Men series was a final sign, that our games are made for the hardcore audience/

Gamepur: For Basement Crawl, Bloober Team seems to have added another tag to their reputation: “Horror/Scary” element? I am asking this because some of the character artwork of Basement Crawl we have seen looks cute but SCARY!

Aron Cender: Yes, horror, scary and dark are very close to our taste. You can expect our future games to follow that path.

Gamepur: Critics are describing PS4 as “gaming beast, true gaming console, 4The Player” and so on. Basement Crawl is not as demanding as AAA titles on this hardware but with respect to PS4 development experience you have, what do you have to say about PS4’s Unified Architecture, 8GB GDDR5 RAM and GGPU?

Aron Cender: It’s an amazing piece of hardware and I’m glad we got a chance to work with Sony. I’m sure in the nearest future you’ll see how powerful it is. You got the first example with The Order 1886, it’s gonna only get better.

Gamepur: No doubt The Order: 1886 early build that was showcased recently looks stunning on PS4. Can you tell us your views on what all things/features are special about The Order:1886 and how PS4 GGPU and RAM are helpful in achieving it?

Aron Cender: I think what stands out for The Order: 1886 are environment details, ligthing and animations, like clothing for example. I doubt it would be possible on any other platform, except PC, so Playstation’s power is certainly a very important factor here.

Gamepur: What you think: “Games Like The Order: 1886 (i would also like to add Uncharted For PS4 from Naughty Dog, because we have already seen what they are capable of) are maxing out power of PS4“?

Aron Cender: I don’t think it’s maxing it out, but I believe it should be pretty close to it. I hope we are gonna see more games of that visual quality in the future, since that was the reason next-gen was introduced.

Gamepur: How’s your working experience with Sony? What do you have to say about their commitment to indie community on PS4?

Aron Cender: Sony definately stepped it up with Playstation 4. They are way more open to indie developers and try to support them as well as it’s possible.

Gamepur: How have you and your team grown as developers or individuals working on Basement Crawl? Would life be less colorful without Basement Crawl?

Aron Cender: We gained a lot of very valuable experience and learned how to do certain things (as well as how not to do ;). It was a great lesson for all of us.

Gamepur: How will you describe your experience working as a part of Bloober Team? Has it been a glorious journey or just a workplace where you reach, complete your work and return?

Aron Cender: It was a journey for sure, but I wouldn’t really call it glorious. More like an adventure, where you find treasures, but you can also meet scary monsters. It’s definately not just a workplace.

Gamepur: Any message you would like to give to our readers about Basement Crawl?

Aron Cender: Check it out and I hope you’ll enjoy it!