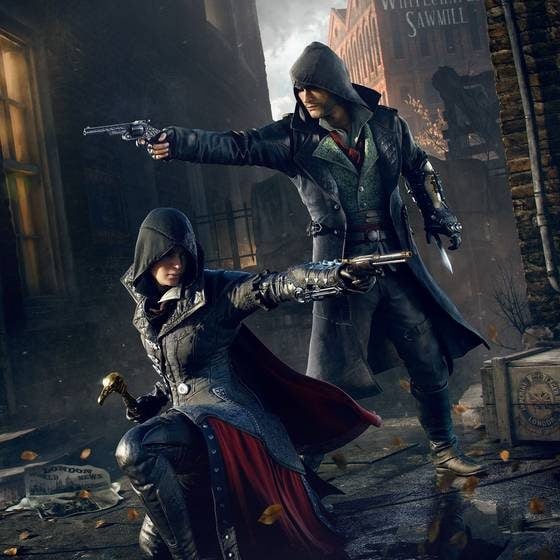 Assassin Creed Syndicate comes with a handful of secrets just like the third playable character: Lydia Frye and the World War 1 mission in the game. There are many well-hidden easter eggs in this Assassin creed series where as some are just referencing the previous or another character of the game.

Easter Eggs are nothing but a hidden joke or message which is explored by the fans or it is revealed by the game designers. In the streets of Victorian London go by unnoticed which the Ubisoft’s developers managed to sneak a little bit. So without any further ado let’s just have a look at all the easter eggs in Assassin’s Creed Syndicate.

All Easter Eggs in AC: Syndicate

If you pass through this guy who is standing near the Thames and can be heard singing the sea Shant’Leave her Johnny!’ from the previous series Assassin’s Creed 4: Black Flag. Check out the Location below and the Man who sings the sea shanty.

There are posters hanging inside the Alhambra Theater in The Strand. These posters directly reference to AC4: Black Flag’s Edward Kenway and AC2’s Ezio Auditore. Both are the Lead Characters in the previous AC series. Look at the images below for the exact reference.

If you visit the WhiteChapel’s Marked Location given below you’ll notice Todd’s Pies is referencing Sweeney Todd who was a Fictional barber who killed his customers and made them into pieces.

During Charles Dickens memory “50 Berkely Square”, he will inform you about how he was Opium addict to the name John Jasper and Edward who is betrothed to Rosa. Once you’re done killing John Jasper in the mission, Mr. Dickens will talk to himself about writing a book which was “The Mystery of Edwin Drood” one last novel in him to write. He died before he could actually complete the book so it was asked to other authors to complete the book.

During your mission for Queen Victoria, if you haven’t noticed you start working with the head of “Her Majesty’s Secret Service” named ‘Alfred Fleming’.

Like we said before some easter eggs are just referencing to the previous character, Desmond is named to Mrs. Disraeli’s Dog and you can check it in the Database entry in Other people. Also, you’ll find Shaun Hasting mentioning Desmond when he is talking to Bishop. Lucy Stillman is also a character from previous AC series and in Syndicate you’ll find she is named to a Drone 3: Lucy. Check out the images below for example.

If you have anything to add feel free and just post them right below in the comments section.