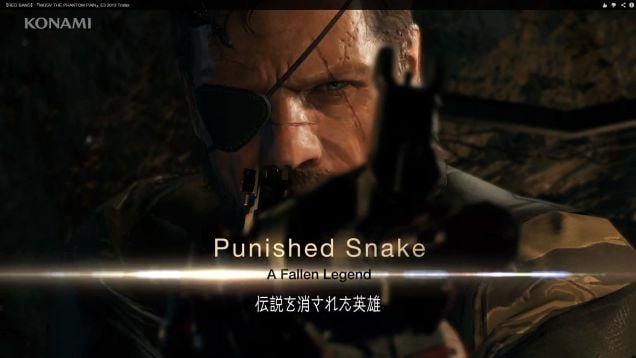 If you went through the Metal Gear series, you know that Hideo Kojima loves easters eggs and that you can find basically everywhere in his games. Now that we have an open world Metal Gear, furthermore, those little surprises have hugely increased in number and quality. That’s why we chose among the eight, less spoilerific yet so amazing ones you will find in the mare magnum of easter eggs included in Metal Gear Solid V: The Phantom Pain: take a look at the list below.

There’s a point in the story when, due to an event you will meet in the game, Quiet is at your Mother Base. You can visit her and, if you do, you will discover she likes music from the 80s but also from Metal Gear Solid 3: Snake Eater, as she often listens to the 007-inspired, and wonderful, “Snake Eater”.

Whenever you start building a new area in your Mother Base, you will see it being worked on and closed to the public, with a great panel stating “Caution: Under Costruction” and a vignette depicting falling boxes hurting people. Well, if you walk too close to that area, actual boxes will really fall upon your head, even producing a funny sound.

The first Hideo Kojima cameo was set to be found in Ground Zeroes, where you could save him in a secondary mission after the end of the main solo campaign. There’s a second cameo, anyway, in The Phantom Pain: if you rescued him in GZ, you will see him employed at your Mother Base, otherwise you will have to go for him in the Side Op 112.

After you meet Quiet, you will see her join your crew and be part of your staff on the helicopter, if you choose to have her as you buddy. Anyway, if you stare too long at her – and you will do, I mean, she’s hot – she will start teasing you and flirting with Big Boss: not exactly the best way to say “stop”…

When your birthday comes, based on the data you insert at the beginning of the game, Metal Gear Solid V: The Phantom Pain will remember about you and prepare you a little surprise for you to take at the Mother Base. Here’s what it is…

Ocelot is part of your crew at the Mother Base. If you are familiar with the series, he is one of the most controversial characters in the Metal Gear Solid saga, yet so beloved. You have the chance to meet and talk with him multiple times throughout the game, and also to shoot at him with your tranq weapons (why not?). Here’s what happens when you do it, with Ocelot becoming so more comfortable in telling the truth…

Huey Emmerich and Dr. Strangelove are two of the characters you might not know if you haven’t played Metal Gear Solid: Peace Walker (in case, do it, it’s great). Anyway, once they fall in love, they have a son called Hal that you might have met in several other occasions… maybe you better recall him as Otacon. You will somehow “meet” him again at the end of Mission 12, as you can see in this photograph:

In case you missed it, Metal Gear Solid V: The Phantom Pain is “A Hideo Kojima Game”, meaning he didn’t care about what was happening with Konami at the time of development and added as much references to him and his studio as possible. That’s why you will find a “Kojima Productions”-labelled Metal Gear Solid V: Ground Zeroes poster during the game’s opening prologue sequence.