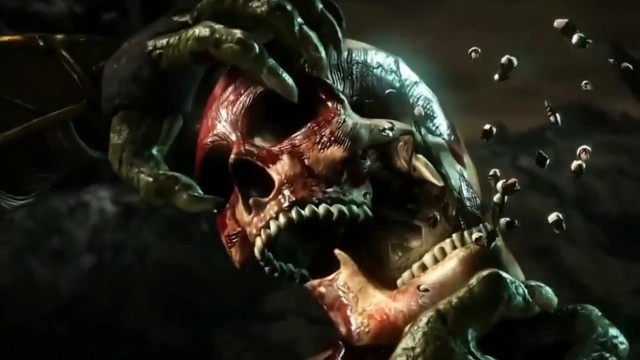 I have spent almost 9 minutes watching Mortal Kombat X’s fatalities and I am impressed, I must say. I am impressed with a couple of aspects that fans of the series are already used to but looking at those from some deeper perspective, those fatalities are amazing. Probably thanks to PlayStation 4, Xbox One and PC’s power, NetherRealms has been able to work even more carefully on the graphical details, which enrich this very violent type of fighting move. Let’s be clear, fatalities are part of Mortal Kombat since Ed Boon created the franchise, they’re its trademark and no one could think to an episode of the series without them (well, apart from Mortal Kombat vs DC Universe).

Asking to display an inferior level of violence would result in disrupting Mortal Kombat’s nature and, as a fan of video games, I would not want this for an industry that already has difficulty in finding a strong identity for its products and constantly offers clones after clones of just one or two winning ideas. So, how do we manage this degree of violence, which could actually become an issue if not handled properly?

Violence in gaming is a social issue. Many have claimed in the last years that Grand Theft Auto V and the complete series has pushed on this particular aspect to generate controversy and gain popularity from it. This is most probably true but I don’t see anything more in it than a sort of spectacularization of real life, where everything is pushed to its limit and crime is in the foundations themselves of society. I mean, what happens in GTA V and in the other Rockstar Games’ titles is a portrait of reality but it’s not what you could see in your everyday life.

You don’t see every day a prostitute being beaten up and robbed by a gangster, and you don’t probably see a prostitute at all. If you see a digital alter ego of yours who is stealing a car, that does not mean you would steal a real car, too. There’s a link between video games (virtual realities in general) and real life that most people misses, and it’s common sense. If someone does not have common sense, he is going to be a social danger whatever he makes during his day, and that regards watching movies, playing football, using a computer or a smartphone, and so on.

As people who have or should have common sense, anyway, we share some responsibilities and the most important regards kids. We have to protect kids and even teenagers who are approaching for the very first times digital products or artistic works like those you could search on the Internet or find in video games and movies. For that purpose, luckily enough, we have PEGI in Europe (ESRB in North America), that is a sort of suggestion, an indication to fathers and big brothers who are going to buy a video game to a younger relative. Many say PEGI should transform from an information system to a proper law, with severe penalties for both the legal consumers and retailers who sell 18+ to people who do not respect those requirements.

This could be an answer to those who continuously attack video games and paradoxically a true move in defense of video games that everyday are attacked by some ignorant politician who think they, and not politics’ inadequacy in front of a world in fast changing, are the main social issue when something goes wrong with terroristic attacks or civilian slaughters. On top of that, anyway, there must be common sense from everyone and especially from those who constantly read and discuss about video games: in one word, us.

This would be a clever way to approach Mortal Kombat X, too. As I said introducing this feature, NetherRealm Studios series’ debut on PlayStation 4, Xbox One and PC means a higher level of realism. A higher level of realism means a maximum degree of violence, in not only locations and characters behaviors but in particular for what regards fatalities. Honestly, I never had a problem with fatalities because they are such a different part from regular gameplay. During fatalities, for example, each hit you give has a visible impact on the other fighter, while a punch or a kick usually does not make any tangible damage on him.

Therefore, fatalities are, in my opinion, something like a show you can sit down and see after matches are over. You do not have any role in them, it is just visual violence for visual violence’s sake and, beware, I said “isual violence”, not simply “violence”, because it is not something that depends on you. You as a gamer determine only the correct start of the move, it’s not like in Grand Theft Auto V where you choose to hit a pedestrian with your car and you have to go through your choice pushing on several buttons in real-time.

From a visual standpoint, then, we can discuss about two points. Graphics (and fatalities) are somewhat cartoony, you can see many details like interiors and blood, but the way that damage is being made is not realistic. I bet you are not going to see a woman or man with claws literally tearing up another’s body… Anyway, talking about realism (this is point two) some details could affect gamers: I mean, for example, the eyes of those dead fighters or the way dead bodies fall to the ground. That looks more realistic and it’s probably Xbox One, PlayStation 4 and PC’s fault because, with the huge amount of RAM and VRAM they are now equipped, they can better handle physics and secondary particulars.

It is something different from other fighting games, where people fight each other without any visual change from their initial outfit. Graphics are being used for other purposes in Street Fighter or Soul Calibur, where fighters finish the fight the exact way they began it and are not object of humiliation or dismemberment, like if they are under the invisible protection of their lovely creators.

One more thing I was surprised to notice is the effect fatalities had on me with and without audio. I first saw it without audio, and then I turned on my headphones to see if anything would change in my mind. The answer was definitely affirmative: sound adds some kind of disgust to what happens on the screen, you can literally hear bones breaking up because of a certain move or skin ripping up with blood filling every corner of the arena. Not a good feeling at all, especially when you receive a fatality, but I must say it is yet another fantastic detail NetherRealm Studios has cared about and has worked on in the last three years or so.

Mortal Kombat X is finally out on PC, PlayStation 4 and Xbox One and now we will see if video games industry is ready enough to handle such a level of violence. It’s up to us, too. Let us know what you think about this topic in the comments section below, and don’t forget to enjoy the game.