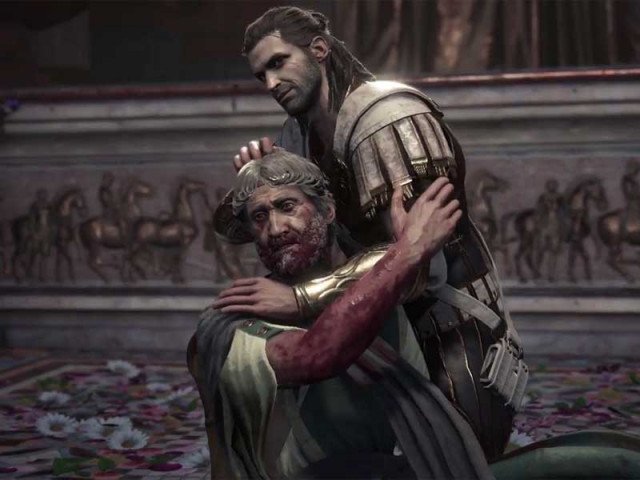 This is a default ability—i.e. available to the players right from the start of the game. Sparta Kick, as the name suggests, is a legendary kick that knocks a target back and deals 160 percent Warrior damage. The best part is that the target won`t be killed. Now you may be wondering: What’s the best part when the target is not killed? Well, here’s the answer: You can recruit the target. For example: Use a Sparta Kick ability on an animal, it won’t be killed, and you can tame it. Same goes for enemies. Sparta Kick them and then recruit them. Sparta Kick also comes in handy when there is an enemy in front of you, ready to attack you with all his/her power. Immediately use this ability to block the enemy attack and get an upper hand.

Bull Rush: This is also a default ability. Being a default ability does not mean it’s not very useful. In fact, whenever you are in a crunch situation in the game against enemies (a lot of them) just use this ability, it will not only take you out of the tricky situation instantly, but will also damage the enemies in front of you. In simple terms, this ability will help you quickly rush through enemies and knock them down. It does a 250 percent Warrior damage.

One of the best abilities that I have came across in the game, Second Wind becomes available at Level 5. It allows you to heal yourself in combat. It can be helpful in all scenarios, but I highly recommended keeping this ability unlocked for yourself if you are going for a long battle. Depending on how far you have upgraded it, it will heal you by a margin of 25%, 35%, and up to 50%. In addition to healing you, the Second Wind ability also helps you remove the Poison or Fire effect from certain enemies.

This ability becomes available at Level 5. Without any level upgrade (that is, at its base level)-, Shield Breaker breaks small shields and does a 150% Warrior damage. This is one ability that will come in handy later part of the story, to be more specific, when you reach Megris. At Megris, you will have to deal with a lot of Athenian Soldiers, and almost all of them carries shields. Upgrading this ability will improve the damage percentage along with the ability to break bigger and stronger shields.

Do you love Melee Combat in an Assassin’s Creed games? Then this is a must have ability for you in Odyssey. The best part is that you will have an option to upgrade it to Level 3 the moment it becomes available in the Skill Tree (it becomes available at Level 5). At a base level, this ability does a 20 percent Warrior Damage, and with upgrades, you can increase this to 40 percent.

It becomes available in the skill tree at level 10. It works very similarly to the Weapon Master ability, but as the name suggests it’s only for Armor. No matter what the scenario you are facing in the game, the Gear Master ability will be helpful. At a base level, it increases armor by 30 percent, and when upgraded it can increase your Armor by up to 90 percent. The other benefits are ranged damage that will take will be reduced, and also the attacking enemies might stagger a bit against you.

This ability becomes available at Level 10. It works a bit similar to the Bull Rush ability but there is a slight difference. It does a 150 percent Warrior damage and comes in handy when you are dealing with lots of enemies (a large crowd). If you are in a situation where you have been outnumbered by your enemies, then make use of this Ring of Chaos ability. It sends a sudden shocking blast that stunts the enemies that are within 3 meters.

This becomes available at Level 16. I highly recommend getting this ability as soon as possible because it makes a massively powerful attack (depending on the weapon type) on the enemies. You can use this ability to make a ton of damage to either one enemy or when you are required to take down multiple enemies by making use of just one ability. This ability requires three full Adrenaline segments.

This becomes available at Level 23. This ability will increase all attack damage by 20 percent for a period of 10 seconds. The best part of this ability is that during this period all enemy attacks are non-lethal, which means it will be impossible for you to die for that short duration. There’s more though: No Adrenaline segments are required for this ability. This ability is a must-have if Warrior is your playstyle. Don’t think twice, if you love this Warrior playstyle then go get this ability as soon as possible.