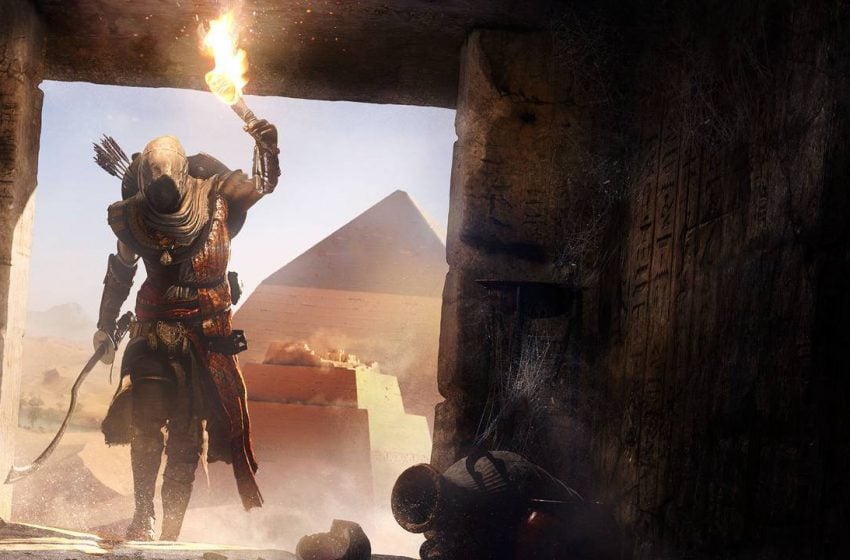 It wouldn’t really be Egypt without the ability to explore secret Tombs. It also wouldn’t be Assassin’s Creed: Origins without some rather interesting secrets hidden inside these Tombs. If you’ve been following our Align the Stars – Stone Circles guide, you’ll be well on your way to retrieve the Legendary ISU Armor. Before you can profit, however, you will need to collect 50 Silica. It just so happens that Tombs are the best place to find Silica, so what follows are all 19 Tomb Locations.

How to Find Silica

Silica is quite a rare commodity around Egypt, and while you may be able to find some in loot chests in high level enemy camps, the best way to find large amounts of Silica is to explore all the Tombs in Egypt. Fortunately, spotting Silica in Tombs is very easy. A piece of Silica glows bright golden, often even in the dark. Be sure to make liberal use of Bayek’s Eagle Vision, which will highlight all lootable items in the vicinity. The Sphinx, which hides the ISU Armor, requires 50 Silica, but you’ll encounter several Tombs with Ancient Mechanisms that require 5 Silica each, so try not to miss too many!

Siwa – Mountain of the Dead Tomb

This is likely the first Tomb you’ll encounter, as it relates to a side quest about saving a young child.

This Tomb requires you to ensure the light beam will reflect all the way to the Ancient Tablet. You do so by moving around the mirrors and occasionally burning off webs that block the light beam. At the end of this Tomb, you’ll be able to enter the Oun-mAa Niye Ressoot Tomb.

In order to access this Tomb, you’ll need to make your way through the Golden Tomb, listed above, first.

Isolated Desert – Tomb of the Nomads

You’ll have to do some underwater exploring in this Tomb!

After breaking through several walls, squeezing through the odd crack or two, you’ll eventually find yourself inside an old library. Look for more walls to break apart in order to find the Ancient Tablet.

This Tomb requires a fair bit of climbing, sneaking through cracks, and then balance out the various platforms in order to move on. The trick is to keep one platform weighed down with enough weight to allow Bayek to climb the opposite platform.

Clearly some bad things have taken place in this Tomb, but the puzzles are easy enough to figure out. At the end of this Tomb, you’ll be able to move on to the Seshem.eff Er Aat Tomb.

You’ll only be able to access this Tomb by going through the Nomarch’s Tomb, but once you’ve made it, you’ll have another Ancient Mechanism to enjoy.

The initial underground area is easy to complete by burning anything made of wood, and breaking two seals that keep a door closed. Once you make it to the area with the Crocodiles, if you’re under-leveled, you can utilize the jars of oil on the second floor to help distract or kill them. Then you’ll have to dive down into the water and hope they don’t chase you down and eat you.

Watch out for the lion lingering by this Tomb’s entrance! Once inside, you’ll need to use the moving platforms to jump along them quickly enough to make your way around the room in a counter-clockwise fashion until you reach the next area. Be aware that there will be guards in that room. Once you’ve found the Ancient Tablet, you can move on to the next Tomb by squeezing through the wall opening.

Only accessible via the Tomb of Smenkhkare, you’ll have to take a leap of faith into some water in the darkness, and then use 5 Silica to activate the Ancient Mechanism.

The biggest challenge in this Tomb is finding the correct way to climb up to the mirrors that need to be adjusted or cleaned in order to allow the beam of light to open the entry to the Ancient Tablet.

Found at the conclusion of the previous Tomb, this one is a great place for Silica, and of course, an interesting Ancient Mechanism.

Uab Nome – Tomb of the Cynic

There are no puzzles in your way to the Ancient Tablet in this Tomb, but there is a pride of Lions that lives in this cave, so watch your step!

Two challenges face the budding Tombraider in this Tomb: a group of bandits, and several platforms that you will need to apply the appropriate counterweights to in order to use. A platform requires three weights to be placed on it in order to counter-balance Bayek’s weight.

You’ll have to crawl through a few secret openings and break some seals to open a doorway here. Nothing that Bayek’s Eagle Vision can’t help you figure out.

Another quite forward Tomb. Just find the cracks to crawl through and ensure you move an item in order to keep a boat from tipping down so Bayek can climb it.

You’ll have to keep your eyes open and pointed upwards in this Tomb. There are two occasions where you will have to jump up and climb up over an existing doorway to make progress.

This is the most anticipated of all the Tombs in Egypt, the famous Sphinx. You’ll find the entrance on the backside of it. Upon entering it, you will not be able to proceed unless you have completed the Bayek’s Promise side quest and aligned the stars at all 12 Stone Circles. You will then be able to proceed and activate an Ancient Mechanism, provided you have 50 Silica on hand.