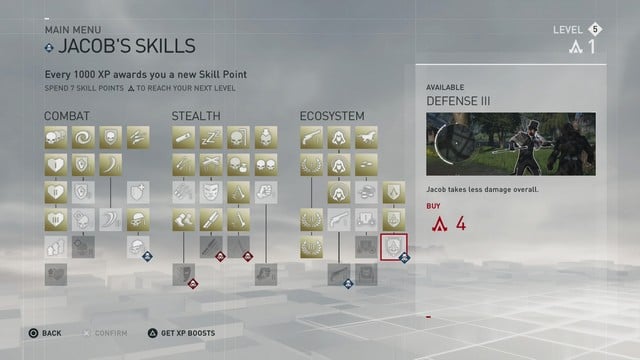 One would ask why people even require a leveling and skills guide for Assassin’s Creed Syndicate. Well, the answer is really simple: leveling is closely tied into Skill Points, which means you need those points in order to level up. And leveling up is important especially if you don’t want to limit to the main quest and want to get collectibles in some of the toughest boroughs in the game’s Victorian London.

So, all players will start at level 1, and will have to spend four Skill Points to progress to level 2. The max level in the game is 10, and in order to move from level 9 to the max level, players will need to spend 18 skill points. This is the scheme:

Now we know what we need to level up: Skill Points. You will need 1,000 XP to get one Skill Points, while you can track your progress by looking in the bottom left of the HUD. Jacob and Evie share both the XP and Skill Points, so every point you get with one character extend to the other, too, although they have two different skill trees.

Currently, there’s nothing we know about fast ways to improve Skill Points (basically, we repeat, get fast experience points), but there’s a lot of things to do in the game so you won’t probably have a proper issue with that. You can focus on the random activities around London, such as Templar Hunts, Bounty Hunts, Child Liberation, Gang Stronghold and Gang War events. In a Templar Hunt of yours, you could get 350 fast XP by throwing at the Templar a Throwing Knife from the distance, for example.

You could also visit in the in-game E-Store and purchase XP Boosts. These come in the form of two and 12 hours boosts, allowing players to earn more XP, which gives them more Skill Points. But that’s the extreme ratio we wouldn’t ever suggest you.