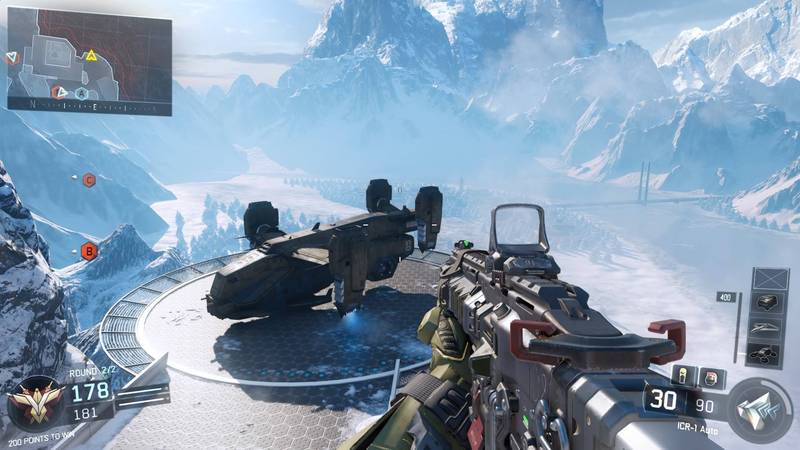 There are Tons of Hidden secrets and Easter eggs in The Giant. If you want to know all the Secrets, Easter eggs and More for The Giant you have come to the Right place. This Guide will provide you exact locations and a walkthrough on how to unlock all the hidden places and grab all the resources.

Starting with the Basics where you need to Turn on the Power on the basis on electricity(for every step). There will be two doors which lead from the Mainframe to the rest of the Area. To Open the Door, you need 2500 points so make your choice.

Now that the Power is Up you can link the teleporters with the Mainframe and repeat this process 3 times. To do so, you need to get inside the Teleporter then Activate it by Pressing ‘F’ and then the timer will start to get back to the Mainframe. You have exactly 30 seconds to make it to the Mainframe and confirm the link.

Once you get to the Mainframe, you will notice a lightboards hanging around the teleporters and the once which you just activated will green. Each time you link a teleporter a random PowerUp will spawn in the starting area.

The one will help you obtain the Annihilator as a specialist weapon. To get this as your Specialist weapon, you need a weapon out of the Pack-A-Punch machine. Then Head to the marked area and shoot the panel(yellow cross) with the same weapon then you need to kill 3 teddy bears as well which are marked in the Map Below.

Here is the Easteregg which is actually a remixed version of the ‘Beauty of Annihilation’-Song from the original ‘Der Riese’. You can activate this you need to activate all three liquid pods are spread over the map.

Once you get close to the Pod you need to press ‘F’ to activate it and do the same for all the three. Once you activated all the pods the song ‘Beauty of Annihilation’ will start to play.

There are more perks yet to be discovered in The Giant other than Juggernog, Quick Revive, Speed Cola, Double Tap Root Beer and Mule Kick. To unlock this secret perk, you need to get the ‘Monkey Bomb’ out of the ‘Mystery Box’. Once you get the Monkey Bomb, plant it to all three Teleporter and then escape to the Mainframe. You will be needing 4500 points for this step.

Once you see all the three green light shining and one big red button will blink next to Pack-A-Punch machine. Press ‘F’ to activate and a laser will get shot out of the panel, reflecting on the sign and the laser will melt down a pile of snow. Once the snow is melted you will see a Perk-A-Cola machine, which has either the Steaming Up or the Deadshot Daiquiri.

There are 8 Radios in total from which five of the messages from Maxis are addressed to the four characters and three especially to Richtofen which addressed to the other characters. To activate these Pods you need to Press ‘F’ once you get close to the pod.

Radio 1
Message: Whoever you are, wherever you are, I have one message. One message that must be remembered at all costs. The child must be protected.

Radio 2
Message: She may have been returned to me, but I fear she is not as she was… In recent months, she has barely said a word. When she did, it was only to cry out for him; to call his name. What have I done?

Radio 3
Message: In these dark days, I find myself clinging to the belief that there may still be a way to set things right. Though my understanding of the ethereal realm remains limited, I am convinced that the manipulation of the energy fields within all matter is vital to uncovering the dimensional gateway itself. It is my sincerest hope that somewhere in the realm beyond my beloved Samantha still lives. I can only pray that Edward will have the courage to fulfill the vow he made all those years ago.

Radio 4
Message: Day 66. The children are gone and the house still feels empty. I miss their laughter, their games. The sirens have not sounded for several months. I do believe that we may have turned the tide on the battle, but at what cost? The radiation levels from the fallout remain dangerously high. I can only pray I live long enough to confirm that my plan was indeed successful and the dark presence that has haunted our dreams, that infected every facet of our existence, has finally been vanquished.

Radio 5
Message: Though our matter transference tests at the new site have been largely unsuccessful, the teleporters malfunction has nonetheless yielded some interesting data. The fact that the test subjects depart from their original point of origin is undeniable; what is uncertain is what became of them. Richtofen is insistent in his belief that they have been transported not through space, but through time. In the absence of empirical evidence, I myself cannot entertain such… madness. I fear Richtofen’s irrationality may soon prove a liability to our endeavors.

The Icarus – Mob of the Dead
You can find this on the top of this building. his was the plane, which helped the prisoners to escape from Alcatraz. Mob of the Dead (Call of Duty: Black Ops II – Uprising DLC)

The Giant Robot’s head
This Head is held by a crane just behind the starting area. The Giant Robot’s head first appeared on the Excavation Site 64, where three giant robots were walking over the map with this head on their top. Origins (Call of Duty: Black Ops II – Apocalypse DLC)

L. Maxis M.D. Office
Simply look through the barricades once you go down the stairs in the starting area, you can see a sign with the inscription ‘L. Maxis M.D. Office’. This refers to Dr. Ludvig Maxis, a german scientist working in this ‘Waffenfabrik’ together with Dr. Edward Richthofen, bevor they got enemies.

Teddy Bear
They can also be found behind the barricades in the starting area. This can be the toy from Samantha which she forgot there when she visited her dad Dr. Maxis in this manufactory.