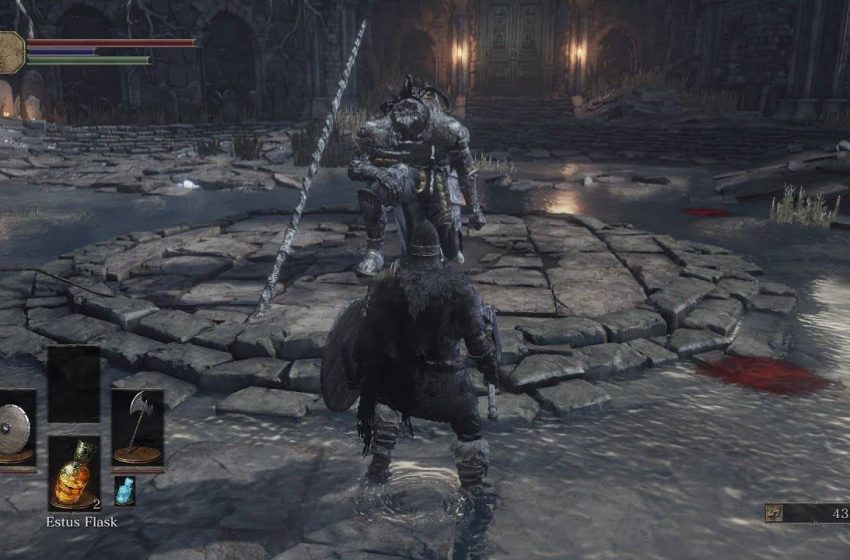 Dark Souls 3: The Ringed City is the new DLC which has two new locations. First is the Dreg Heap and the second one is The Ringed City, final stage. In Dreg Heap you will fight with Harald Legion Knight that will frequently respawn in various other locations, Knights, Angel, and three Demons in the end Demon in Pain, Demon from Below and Demon Prince who is the final boss.

As you start with the new location that will take you to The Dreg Heap, walk ahead and at the end talk to a Stone-humped Hag. Tell him I have a business with you. You can buy and sell items here. Keep talking and he will tell about a deep, dark hole carved out of a tree.

Jump Down from the right of a hag, and go further down on the left you can see a narrow stone bridge. Fight with a few demons ahead, they will follow so you can stand back at a high point and kill them one by one. After fighting them, turn left and takes the stairs up to an open roof. Here you can fight with Harald Legion Knight, if you want to skip it, then don’t go up, instead, take a right and you can see a white glowing light over a rocky platform. This will break and you will fall down into a ruined library.

You will have to right with the first big enemy a Harald Legion Knight. Don’t attack him from the front, the best way is to use combo shots on the backside and then run away then the Knight attacks you. It uses jump and a combination of multiple attacks when you are near. But when you attack from the backside it takes some time to turn around. you can notice its attack, it will either jump or raise its sword. At that time you can run back. Dodging is essentially important against this enemy. You can also use some fire attacks. After defeating it take the stairs to go further up.

As you fall down it will take a decent amount of health, you won’t die, and you will need to right off a few demons in the place. Along with a new one, who seems like a black smoke. It will keep on attacking you in between, so just dodge its attack. There is an opening on the left side. Take a right turn and front ahead you can see a large demon Angel. No need of attacking him, all you need to escape his attacks. Take the narrow path on the right, jump down, and take cover behind stones. Run straight to the entrance ahead where you will fight with two knights who will respawn regularly. Take the entrance on the right side. Watch out for demons attack here. Don’t charge, wait back and then attack.

There is the fountain in the middle you need to take a left turn. Pass through the fallen tower and run straight ahead to the next entrance skipping the angel’s attack. Kill the tree-like pilgrim on the left side to defeat the angel. After killing it, move ahead and jump down. The shadow demon will attack back again, on the left there will be a horde of demons along with Herald Knight. After killing them all at the end there is no path, probably jumping down will help. There is usually sand below, so it will not cost health. This new place has a broken windmill house. After jumping down look on the right side for a Bonfire. Lit it and then move ahead from the Bonfire location and turn left. There is an Angle ahead.

The second one will be in front of you. To kill first run to the hut for cover ahead. You can stop by any object to avoid its attack. The Angel makes a sound before unleashing beams of light that can eat up a good amount of health.

Look on the right side there is another hut, you need to run behind it and jump down on a thick tree root. Check the image above for reference. Run to the hut, there is a rock on the left that you can use to take cover. There are ample of things around that you can use to avoid the angel attack, it will turn around for a while, that is the time you must run to the spot. Finally after reaching jump to the thick tree stem behind and walk right. Then turn left and you will reach the pilgrim. Kill it to stop the angle. Next move ahead and take the thick tree branch that goes up. Keep following the branch till it takes you to a falling tower and a few wooden huts on the left side. On the ride side, there is a broken roof of a fallen tower, jump down for the Bonfire Lit. Now move straight ahead and jump down once again to a deep hole below. After landing you will need to right with three Demons.

Demon in Pain: This one is faster one that will constantly follow you can attack. Keep attacking the body parts once the health is lower than 60% the demon will slow down.

Demons from Below: Attack on the legs continuously and skip the swipe attack. This one is a bit easy to kill, so you can start with it and skip the above one. Once it is down you can fight with the bigger one.

Demon Price: Once both the Demon dies the Demon Prince will appear. A much bigger demon which can also fly up and unleash a devastating attack. Try attacking the leg and if possible the head. It will also use fire attacks from various angles, so it will be a bit hard to him down.

After killing the Demon Prince look around and you can see a small entrance at the extreme end. Lit the Bonfire on the left of the entrance. Enter the ruins next, go straight and then take the path ahead inside the tunnel below. You will reach an open area, and interact with Display Small Envoy Banner. A few bunch of flying Demons will appear and they will take you to the Ringed City.

So this was the end of first part of Dark Souls 3: The Ringed City DLC, where you had played The Dreg Heap. Next is the Ringed City, you can also refer to Dark Souls 3 Wiki for the full walkthrough and other guides.