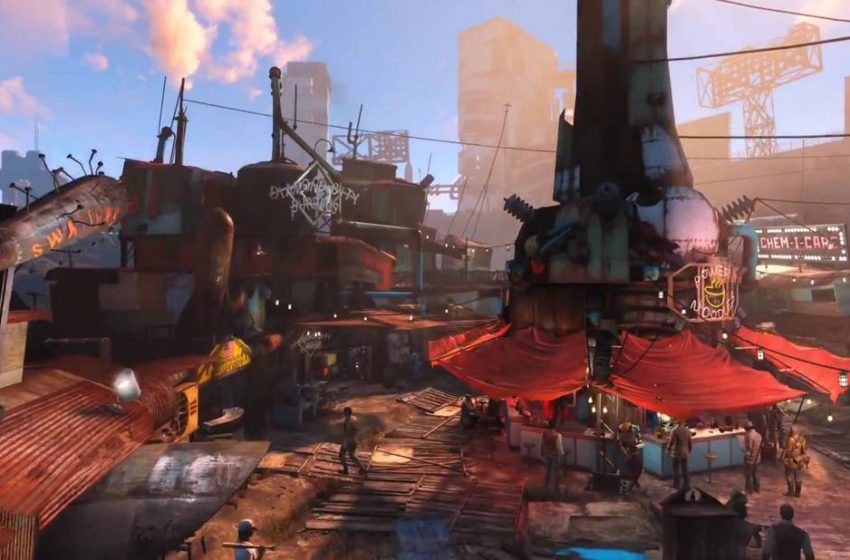 Combat is an important component in Fallout 4, as you could even call it an action-RPG title, although it is very sui generis, something really different from your regular action game. In our guide we will discuss HUD, rules in combat situations, stuff to improve your health, creatures.

Compass: there are three icons appearing on your compass, and those are unexplored areas, explored areas and enemies. Unexplored areas will appear as pictures with a white border. Enemies will be displayed in red.

Favorite system: press Q in the pip boy on a usable item or weapon and assign it to a number. Pressing F you will have your items quickly displayed.

Power Armor, Health Bar: health is represented with a meter going from 0% to 100% on the left side of the screen.

Power Armor, Fusion Core Durability: there’s not a specific time your fusion core, the stuff that makes your power armor run (cost around 500 caps), but it depends on what you do while in the power armor and since its cost is pretty high you should limit the use of the pa or at least do some scavange in order to don’t spend too much on fusion cores.

Power Armor, armor durability: unlike Fallout 3 and New Vegas, you can’t repair your armor but pieces of it can break, then you will have to repair back at the power armor station. You will also have a chance to make some modifications to it. You will need aluminium in order to repair.

First thing you should do is finding a good spot for cover. This doesn’t absolutely depend on the quality of your enemy, since every enemy in Fallout 4 is able to do severe damage.

You should always have another weapons selected as quick choice, in case you run out of ammo with your main weapon and you think it’s better for you to change instantly weapon instead of reloading.

Finally, don’t worry about many enemies appearing in the same place until you have a good spot on the area: this kind of situation allows you to launch grenades/molotov or even place traps.

Chemicals: rather than simply fix your health bar, chems in Fallout 4 are useful to enhance your combat skills and more, but cause addiction. There’s a perk in case you would like not to have any impact in terms of addiction. If you find yourself not using any of them, sell it for some caps, they’re pretty valuable. To get rid of addiction you can visit a doctor or have some Addictol.

Food: hunt for your food and don’t just use stimpacks to fix your health bar. Radroach meat provides you with 15 health at the cost of 12 radiation; otherwise you can cook it at the first camp fire you find on your way to completely get rid of radiations, and this is a good solution if you find yourself having a lot of meat and not a concrete urgency of eating it.

Radiation and health recovery: as for health, you can go to a doctor to completely take care of your radiation level. It’s not expensive but it’s depending on the degree of your radiations. Otherwise you can still use the RadA-way chem so you can get rid of radiations on the fly; Rad-X also reduce the chances you can get radiation from visiting certain locations or simply eating meat. Remember you can recovery your health by sleeping, too.

Radroaches: don’t try and melee attack them as they are able to provide close damage. Shoot at them if you have a good amount of ammo or even consider escaping the area.

Bloodbug: the most dangerous thing with bloodbug is that they attack in group, so there’s always a lot of them to try and beat, and it’s never easy as they are very fast while flying around. The only thing you can do is shoot at them. Hatchling > Base

Bloatfly: low health but they can shoot an acidic projectile at you; melee is finally a good option. Base > Black

With humans FPS general rules work, shoot them in the head or at their arms/legs if you want to affect their chances to make some damage first.

Fergal ghouls: shoot at their heads if you manage, as they will keep running towards you also in case they lose limbs. Base > Roamer > Stalker > Withered > Gangrenous > Charred > Glowing > Putrid Glowing

Yao Guai: it’s a variant of the bear and has a lot of health, with powerful melee attacks. Shoot at its head and be sure you are always at a certain distance from it. Stunted > Base > Shaggy > Glowing > Albino > Rabid > Dusky

Mirelurk: a variant of crabs, mirelurks have a powerful shell covering their body so you’ll need to shoot at their heads for maximum damage. Hatchling, Spawn, Softshell, Base > Razorclaw > Killclaw > Glowing > Queen (if you meet the queen, inflicting radiation, regenerating health, just run away).

Mole Rat: weak variants of rats. Melee attacks are a good option if you don’t want to waste ammo. Base > Rabid

Deathclaw: they have a powerful attack causing you to completely lose your health and facing a fast game over. The belly is their weak spot. Base > Savage > Albino > Chameleon > Glowing > Deathclaw > ?

Machinegub Turret Mk1, 2, 3: take cover and shoot at them as soon as they stop shooting at you

Protectron: Shoot at the glass protectin their brain, then at their brain.

Eyebot: Shoot them on sight and they will provide you with circuitry. They have just one laser shot attack.

Sentry Bot: these are equipped with minigun and rocket launcher, so they’re a bit tough to beat but once you manage to do that you will be able to gain fusion cores.

Synth: shoot them in the head, whichever of the three generations you will happen to face. You will have to take cover especially in case they move in groups. Base > Patroller > Assaulter > Seeker > Strider > Trooper > Leader