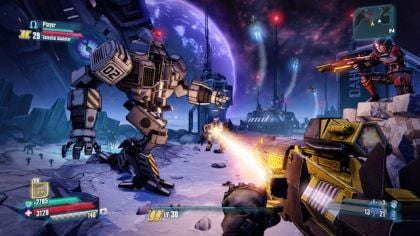 It is a first-person Shooting game developed by 2K Australia. As with previous games in the series, The Pre-Sequel features four playable characters, each with different class and abilities. There are some areas you have to beat for the side quests which will help you earn bonus Exp and decent weapons. Given below is the list of Side Quests and how to complete them.

As you reach to the way point there will be a sound that you can hear, it will be of the Claptraps talking about the Weapons they are making. Now what you have to do is lock one of the Claptraps when you get the bolt. Cyrogrenade upgrade is given to you by the left one and the corrosion laser by the other.

To find Dr. Spara, on the R&D map head to the ! sign. Collecting 3 Trak brains right outside the rocket area is what she will ask you do do first. As you are done with that go to the next way point and kill Stalkers for their wings. After that make your way to the three way point and collect the blood from there. When all of this is done go back and put the rockets together and launch the first one.

Next you have to collect Dahl brains, head shots will get the brains out from the next way points. Return with the brain and put it in the second rocket. Then that rocket fails combine the two brains and freeze it. When you are done with all of this just launch the final rocket.

At a “!” on the R&D map is where you will find this. The only thing you have to do is wait for him to open the window then you close it yourself.

At the same ! spot you will find it. Firstly go to the first way marker and grab the echo. Then go to the lab and try to open the container, then you will need the code its on the wall right before the Aquatic Observation Area, go get it and return to the lab. To your right of the console you will find the place where you have to put the code. As you put the code in just use the console again. You can turn the quest in after you kill the mini destroyer.