It seems like “Ubisoft” and “Controversy” are two side of the same coin. Today, Ubisoft’s Senior Producer Vincent Pontbriand started a new controversy with the announcement of Resolution and FPS figure of Assassin’s Creed: Unity. It will run at 900p/30 FPS on both PlayStation 4 and Xbox One, but the main reason behind “PS4NoParity” movement was the reason Vincent provided, for 900p resolution, “to avoid debates”.

This decision has not gone down too well with PlayStation 4 owners, and they have started a movement “#PS4noparity” to let their displeasure known to Ubisoft. Not only on Twitter, PlayStation 4 fans are unhappy with Ubisoft and are bombarding Ubisoft with nasty comments and are pledging not to buy Assassin’s Creed: Unity, on Reddit as well as Facebook.

You can check out some of the PlayStation fans comments below:

“It’s like buying a Ferrari and having it locked to go no faster than 65mph. #PS4NoParity”

“@Ubisoft Why would I give you my money if you’re going to not develop to my system’s full potential? Unity Preorder Canceled. #PS4NoParity”

“WOW! Ubisoft shot themselves in the foot again. How can a sequel be in a lower resolution to is predecessor? Oh we know why. #PS4NoParity”

“900p/30fps dont bother me but dont bullshit me,the technical benefits of the PS4 should show in some form.Just like pc version #PS4NoParity”

If i buy a ps4 i want graphics i paid for, i didnt buy a xbox one so dont treat my ps4 like one #PS4NoParity

And here comes the ultimate one: 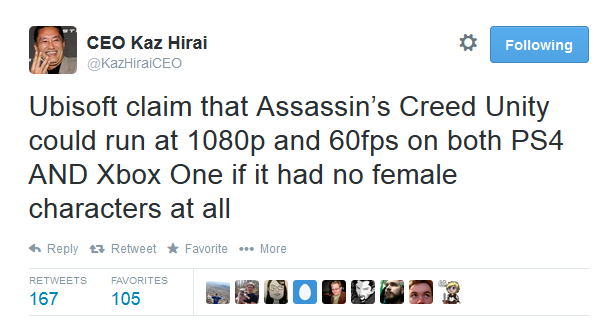 In simple lay-man’s term, how would a sequel to a particular game will run at lower resolution than its predecessor? I am not here to start a long debate of PS4 vs Xbox One: Resolution vs FPS Battle, but Ubisoft could have handled the development of Assassin’s Creed: Unity better i.e. should have gone for 1080p on PlayStation 4 and if they were facing some issues achieving it on Xbox One, they should have openly contacted Microsoft to achieve it like in the case of Bungie’s Destiny and Blizzard’s Diablo III.

This would have been a win-win situation for everyone from Ubisoft to Microsoft to Xbox One fans, but sadly, Senior Producer Vincent Pontbriand gave birth to another NASTY controversy in PS4 vs Xbox One battle.

Now the only hope of PlayStation 4 owners is: Ubisoft is admitting their mistake and releasing a Day One Patch for Assassin’s Creed: Unity which increases the resolution from 900p to 1080p, But Will They Deliver?