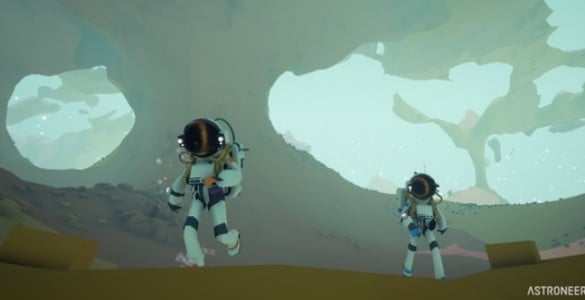 Astroneer, a space exploration and survival game with support for co-op, is getting a huge Research Update today as part of its early access program. The latest update completely overhauls the way the research system works in the game, and should bring new opportunities for players to work together to build more things while trying not to get lost in the mines they’ve dug. Not that I’ve gotten lost in my own mine in Astroneer before.

As the update’s namesake suggests, the focus is on how Astroneers conduct research in the field. In the past, players would drag strange alien items that they’ve found in the world to a research station and hope the resulting blueprint would be something they could use. Going forward, System Era Softworks is introducing the concept of Bytes, which are used to unlock blueprints.

Bytes are acquired by using a new Research Chamber platform to decrypt a variety of items, including Research Chests and the various resources, into data, which becomes a quasi-currency. Players will then use these Bytes to unlock specific blueprints using their backpack’s catalog. This should allow Astroneers to focus on the blueprints they’re most looking for at any given stage of their survival experience.

This new process of generating Bytes should push players to focus on a solid base infrastructure as the Research Chamber requires uninterrupted power to generate the data. It should also provide a more focused sense of purpose to your friends who are currently digging around 500 feet below you trying to unearth strange items. Just don’t die down there, friends! You know who you are.

Streaming Power and the Future

The other major change introduced in this update is the idea of streaming power. In the past, the various stations were powered on an individual basis, often by using a power bar which had to be refilled. The new system will allow players to implement sources of power within a network that will continually feed stations with the power they require.

Additional UI updates, hints for new players, new resource colors, and a boat load of bug fixes are also part of the update. For those wondering what’s coming next in Astroneer, I highly recommend you have a full read through the road map section of System Era Softworks’ announcement. Everything from dedicated servers, to base building, and new weather and terrain hazards are on the horizon.

Perhaps it’s time to revisit Astroneer and check out the new features. What do you say, Bill? Oh, and also, could you bring a few stacks of Resin with you, please?