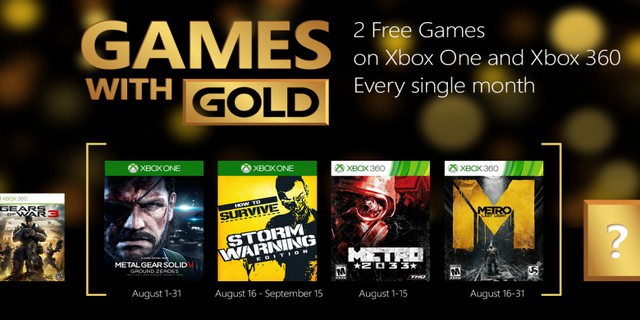 Microsoft has announced August Games with Gold, that come along with the Xbox Live Gold members. This month the program will offer four games, two for Xbox One and two for Xbox 360, and they’re all pretty sweet.

For Xbox One, you will be able to download with any additional charge Metal Gear Solid V: Ground Zeroes during the entire month of August and How to Survive: Storm Warning Edition from August 16 to September 15.

It seems to be a great month for Games with Gold, as Ground Zeroes comes right days before the release of follow up Metal Gear Solid V: The Phantom Pain, and August is a great month to recover titles you might have lost in the past. So Metro 2033 and Last Light will allow you to learn everything about the series and master it.

What’s your take on August’s Games with Gold? Let us know in the comments below.