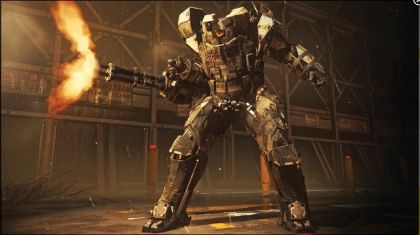 GameInformer June 2014 cover story is Sledgehammer’s upcoming Call of Duty game, Call of Duty: Advanced Warfare and a OneDrive user has leaked the scans of the full preview.

The details in the preview confirms that Sledgehammer Games is making use of a brand new engine called as “Fossil Engine” (Read Update below) for Call of Duty: Advanced Warfare. Its an advanced version of original IW engine used in Call of Duty series.

The most interesting thing to notice in Game Informer preview of Call of Duty: Advanced Warfare was the text written in bold on the very first page:

“After 10 entries in the main series, it’s become clear that Activision is aware Call of Duty must evolve to relevant”. From this its pretty clear what Activision wants Sledgehammer Games to deliver with Call of Duty: Advanced Warfare.

Furthermore, the things that were showcased to GameInformer was a part of campaign’s storyline, however the publication did managed to extract words from the developer on what to expect from a Advanced Warfare online:

“We’ve had two and a half years to dedicate this team to do a full next-generation experience of Call of Duty multiplayer” said Sledgehammer co-founder Michael Condrey. “You can probably imagine the possibilities of a lot of stuff you saw in single-player and how it would apply online”

These words of Condrey seems to point towards EXO abilities and other such abilities. The series that have “sliding and diving” as two major navigation option these new additions is definitely going to be a major boost.

The magazine also confirms last-gen port of Call of Duty: Advanced Warfare being developed by another studios, but no name was revealed.

We can’t post the full scans of the magazine because of copyright issue, but can you check out the full resolution screenshots from it showcasing character artwork, in-game screens, weapons and more HERE, and full preview scans on ONEDrive.

Activision has officially confirmed to us that “Fossil Engine” is not the name of engine that powers Call of Duty: Advanced Warfare. Sorry for the miscommunication.