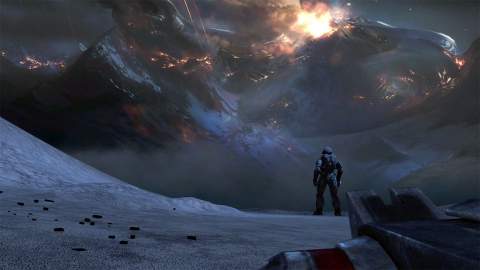 After a huge hype and anticipation, Activision’s Destiny, an online multiplayer persistent world first-person shooter, has finally arrived. People were not allowed to review this game, citing the reason as the developers want a well populated universe for a full gaming experience. Without any reviews no one knew how this overhyped game was going to turn out.

The game has now released with average reviews from critics. A French gaming website “Musga” has awarded Destiny an average review score of just 6 out of 10. The publication states that Destiny feels repetitive as it offers same tasks and situations in every planet. Read the full coverage HERE.

According to analysts, a whooping $500-million are spent on Destiny and to recover the the money Activision should sell about 15 million to 16 million units of a $60 game.

On the other hand gamers are not very happy with Destiny. An Xbox user JakeKav said:

“A big problem is that the storyline only took about 9-10 hours to complete. Even though I did ‘rush’ through it, that’s still extremely short for such a hyped game. Especially hyped for “The Traveller'” and what it’s about.”

He says, Destiny has its own fun parts but even they become repetitive. Missions are same with only a change in location. JakeKav is disappointed and was not able to find much about the Mysterious Darkness. Read the full Coverage HERE.

Seems like the overall crazy hype that was created is not supported by the actual game. Tell us in the comment section, what do you have to say about this risky bet that Activision has laid it’s hand on