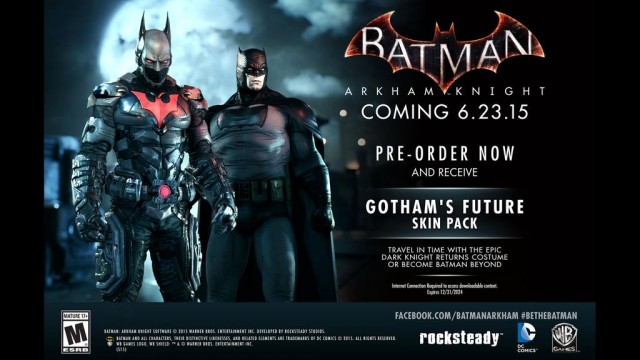 Rocksteady, the developer behind popular Batman Arkham video game franchise, recently held an AMA session on Reddit and talked about various aspects (story, gameplay and other features) of the upcoming title, Batman: Arkham Knight. In addition to this, Rocksteady also announced that a brand new trailer of Batman: Arkham Knight will launch on coming Monday.

About Storyline of Batman: Arkham Knight, Rocksteady said that it starts immediately after the Joker’s death in the last installment of the franchise. The developer stated that Joker’s death is the point that they jump off and the development team asked a question “what happens when Joker is removed from Gotham”, and going after the fallout of all those events.

In addition to this, Rocksteady stated that Batmobile is a very important part of Batman: Arkham Knight and there are many missions in the game that will require this deadly beast.

“They’re fast, and they can dodge and counter you – in the most recent builds they’ll dodge you without making you drop your combo, so it’s easy to get caught out the first few times.”

“Now that we’ve got all of Gotham to explore it’s a great experience. The City design team here has done an amazing job building an environment that’s huge and intricately detailed. The detail in Arkham games was always my favourite thing about playing them before I joined Rocksteady, and it’s awesome that the guys have managed to keep that level of care on something so much bigger.”

Lastly, Rocksteady announced that a brand new gameplay trailer of Batman: Arkham Knight will arrive on December 1 at 9AM PST, it might be the second part in Ace Chemicals Infiltration video series (you can watch first part here)

Batman: Arkham Knight releases in June 2015 for PS4, Xbox One and PC.

How to beat all Code Vein bosses