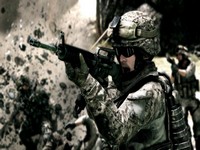 DICE has revealed some new details regarding upcoming new patch for Batllefield 3. Previously this new patch was scheduled to launch at somepoint in February, but according to Daniel Matros, it will miss February release window.

“It was announced by someone who got the dates wrong,” Daniel Matros said. “the date was never really correct anyway.”

Battlefield 3 Gameplay designer Gameplay Designer Gustav Halling added that the development team is “working in a big one, no ETA when it’s out, these things take time.”