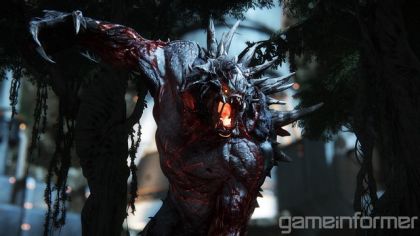 The developer made this announcement via game’s official website and stated:

“We have some unfortunate news to share with folks planning to participate in the Big Alpha test on PlayStation 4 starting today. Following the recent PS4 2.00 firmware update, we are experiencing difficulties with the Evolve Big Alpha on PlayStation 4.

As a result, the test on PlayStation 4 is postponed. PlayStation and 2K are working together on a resolution. We know that for many of you PS4 players this is a big letdown. We’re disappointed too, and we’re going to do our best to make up for this delay.”

From Turtle Rock Studios, creators of Left 4 Dead, comes Evolve — the next generation of multiplayer shooters. The game is officially scheduled to launch on February 10, 2015.

Four Hunters face off against a single, player-controlled Monster in adrenaline-pumping 4v1 matches. Play as the Monster to use savage abilities and an animalistic sense to kill your human enemies, or choose one of four Hunter classes (Assault, Trapper, Medic and Support) and team up to take down the beast on the planet Shear, where flora and fauna act as an adversary to man and monster alike.