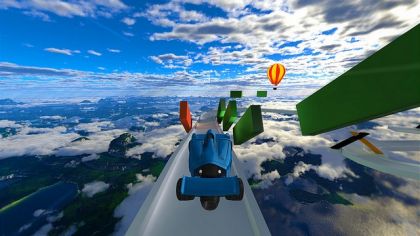 One of our favourite mobile games, Jet Car Stunts is coming to Playstation 3, Playstation Vita and Playstation 4, all thanks to development team at Grip Games.

We recently got in touch with Grip Games co-founder Jakub and talked on numerous topic related to console port of Jet Car Stunts such as resolution at which it runs of PS4 and more.

Jakub later added: “We will also use advanced anti-aliasing features to make the game look even smoother than a typical 1080p game.”

Jet Car Stunts will be released simultaneously for PS3 and PS Vita, followed later by the PS4 version that will contain shinier graphics and effects.

We also asked Jakub, whether the slow CPU speed of PS4 resulted into any development challenges for Grip Games while developing Jet Car Stunts?

He replied that development team did some insane things like MSAA and FXAA anti-aliasing at the same time, with real-time lighting and complex particles and post-processing effects, and next-gen consoles didn’t even break a sweat. View our full coverage: “Dev Praises PS4: Achieve insane things like MSAA/FXAA anti-aliasing, real-time lightning and it didn’t even break a sweat“

How many of you are excited about Jet Car Stunts? Share your view with us in the comment section below.