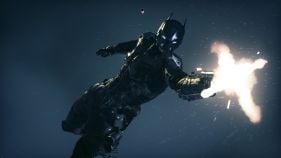 Rocksteady has just shared another gorgeous looking in-game screenshot of Batman: Arkham Knight showcasing deadly Batmobile tearing apart other cars and making his way out like a King.