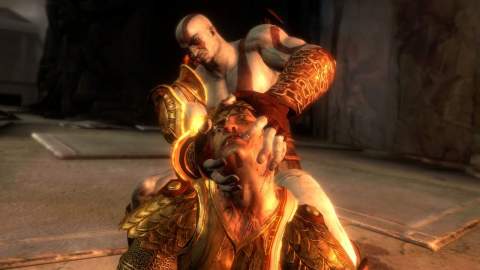 New God of War details has slipped from an interesting interview involving YouTube channel The Know and creative director Cory Barlog. As brilliantly summed up by NeoGaf users, these are the main info we should look at while searching for more news about God of War:

Firstly, Cory Barlog revealed that the development team currently working on God of War PlayStation 4, most of them are from the original team that worked on the very first God of War game.

Lastly, Barlog revealed that in God of War PlayStation 4, players may visit some of the 9 Realms, there will not be a morality system, no branching in the story.

So it really looks like what we’ve seen in the E3 2016 long demonstration is just the beginning of God of War, and somehow not very representative of what we’re getting with the full game, i.e. a number of enemies we’ll meet is pretty impressive for a God of War game.

Interestingly, there won’t be any branching in the story so, differently from one could have thought by looking at the dramatic demo showcased at E3, the game is still being linear as it has always been. Many Santa Monica Studio guys are returning right from the team that created the original God of War, so it really looks like there won’t be much room for revolutions.

God of War is coming exclusively on PS4, release window is not yet known.