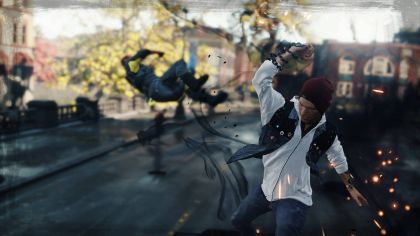 Sucker Punch has just released latest patch for their Playstation 4 exclusive, Infamous: Second Son. The update adds some much requested fan features like changing day time of the day, 30 FPS lock and a brand new photo mode that allow users to take some stunning looking screens directly from Playstation 4.

I used the term stunning screens via Photo mode deliberately because few users have uploaded new screens taken via this mode, you can check them below.

As mentioned above, the patch also adds option to change the time of day, Infamous: Second Son features 8 different times of the day, so there’s plenty to enjoy.

Have you downloaded this latest patch for Infamous: Second Son? Share your experience of new Photo Mode with us in the comment section below.

Infamous: Second Son is the fastest selling title in Infamous franchise, the game sold One million units in just first nine days of its release “both retail and digital” sales combined.