This is not a April Fool Joke, It seems like Persona 4 is indeed coming to Playstation 3 as Playstation 2 classic. ESRB: Entertainment Software Rating Board has just rated Persona 4 for PS3.

This rating is a clear suggestion that Persona 4 is coming to PS3 as a PS2 classic, and ESRB has a good track record of leaking games before its official announcement.

For those who are unaware, Persona 4 is one of the greatest games of all time. For PS3, ESRB has rated it “M for Mature” for content related to alcohol Reference, Animated Blood, Language, Partial Nudity, Sexual Themes and Violence.

You can read full rating summary below:

“This is a role-playing game in which players control a high school student who enters a mystical ‘TV World’, ‘saves lost souls’ who are trapped on the ‘Midnight Channel,’ and establishes bonds with town characters in order to develop ‘Personas’. Personas, which are summoned through the use of tarot cards, are creatures that can perform special offensive and defensive moves to aid during battles against monsters. Combat is turn-based with numeric values and light effects indicating attack/damage inflicted.”

“Pixilated blood spray is briefly depicted during battles, and colored bloodstains stain some walls and floors. Some female monsters (female Persona) are depicted with their breasts exposed, while other monsters have phallic-shaped heads and torsos.”

Other female Personas (e.g., ‘Succubus’) have sexual characteristics that are described in text: ‘They visit sleeping men and have sexual intercourse with them.’ Story elements also make references to alcohol, including a long scene in which the main characters hang out in a club and play ‘drinking games.’ Although alcohol is never consumed, the characters display the telltale signs of intoxication: slurred speech, staggered walking, and red faces. Profanity (e.g., sh*t, a*shole) can be heard in the dialogue.” 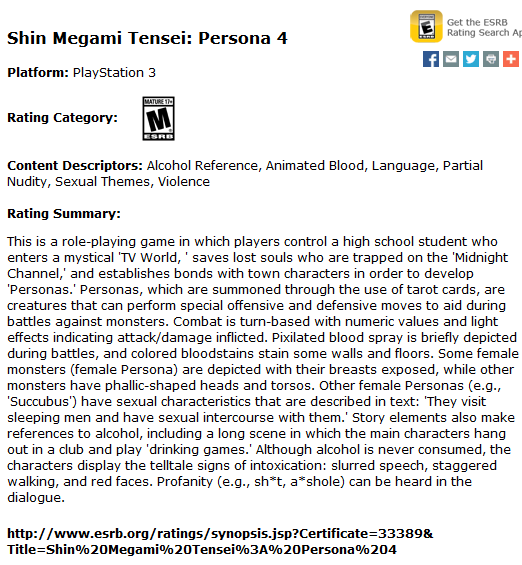