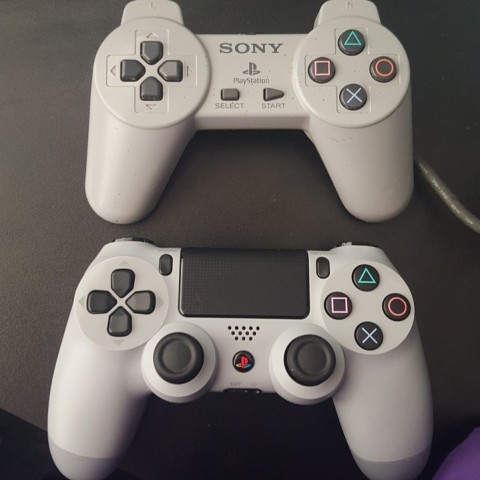 Sony is celebrating PSone’s 20th anniversary by releasing a special edition of DualShock 4 with the colors of the legendary home console. This version was in origin an exclusive to those lucky men who had bought the limited and numbered edition of PlayStation 4 with a design inspired to PS1. Now, we have a comparison photo that includes both the controllers, basically showcasing 20 years of evolution in video game’s technology and how the needs of players have changed over the decades.

Select and Start are no more, replaced by Share and Options buttons, while the PS Button has been introduced with PS3, and allows you to turn on the console and access the dashboard. Both something we couldn’t even imagine when we were kids.

Speakers weren’t included, too, and the TouchPad is one of the new things arrived with the DualShock 4 which are striving to define another standard – we’ll see in the future what happens about this.

Analogue sticks were introduced a few years later with the first DualShock, as they weren’t part of the original edition of the controller, included in the box at launch, together with the rumble functionality.

Share your memory about the PSone and its mighty controller in the comments below, and let us know in the case you’re thinking about buying the new DualShock 4 edition.