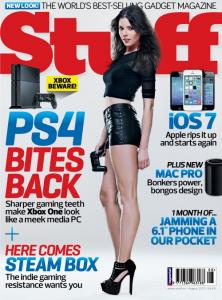 Suff Magazine has revealed the front cover of its August 2013 issue, and guess what it has on it, Sony’s next-gen Playstation console “PS4” with a tagline “PS4 Bites Back” and “Sharper Gaming Teeth Make Xbox One Look Like a Meek Media PC”.

As per the details we have received, Stuff Magazine August 2013 Issue carries a full debrief on the next-gen console battle, looking at the games, the hardware, the multimedia skills, the controllers (or lack of) and the third way: a Steam Box.

You can check out the front cover of Stuff Magazine August 2013 Issue below:

We have no idea how popular Stuff Magazine is among gamers, but views shared by them are very much similar to that of Edge Magazine, which in its latest issue (#256) said Playstation 4 is the “only option right now” for consumers across the globe.