IHS, a firm specializes in video game anaysis recently analyzed Sony’s recently released next-gen Playstation console and came to conclusion that each PS4 costs Sony $372 for hardware and an additional $9 for assembly.

In a press release IHS said, “With the new PlayStation 4, Sony has produced a design whose component and manufacturing costs are starting out lower than its price tag—paving the way for the company to quickly attain profitability on hardware sales, according to preliminary results from the Teardown Analysis Service”

“The bill of materials (BOM) for the PlayStation 4 amounts to $372. When the manufacturing expense is added in, the cost increases to $381. This comes in $18 lower than the $399 retail price of the console.”

“When other expenses are tallied, Sony initially will still take a loss on each console sold. But the relatively low BOM of the PlayStation 4 will allow the company to break even or attain profitability in the future as the hardware costs undergo normal declines.”

“When Sony rolled out the original model of the PlayStation 3 in 2006, our teardown analysis revealed that the console delivered supercomputer-class performance at a price equivalent to a notebook PC,” said Andrew Rassweiler, senior director, cost benchmarking services for IHS. “However, this achievement came with a major downside for Sony, as the BOM costs for most of the different versions of the console were in excess of the retail prices, in some cases by more than $100. Although Sony brought the PlayStation 3’s costs down significantly during its lifetime, the company’s intent was never to make money on the hardware, but rather to profit through sales of games and content.”

“This time, Sony is on a greatly shortened path to the hardware break-even point, or even profitability, with its cost-conscious PlayStation 4 design. The company is pulling off this feat, despite offering a brand-new design that once again includes avant-garde components that yield superfast performance. The PlayStation 4 keeps a lid on costs by focusing all the additional expense on the processor and memory—and reducing outlays for the optical drive, the hard disk drive (HDD) and other subsystems,” Rassweiler noted.

Here is PS4 manufacture price breakdown according to IHS: 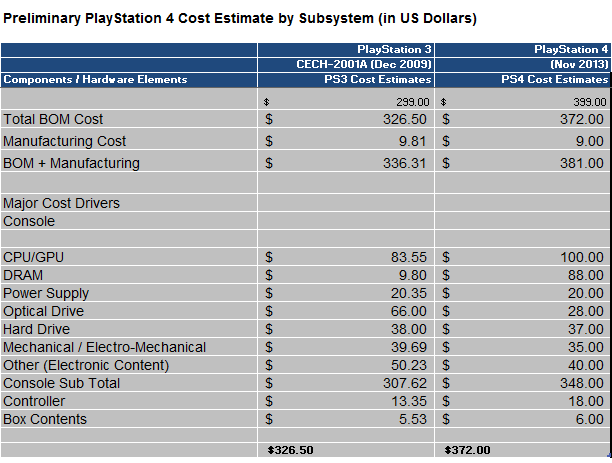