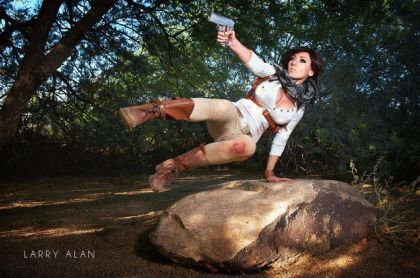 Recently, an ex-employee of Sony Bend announced that the brand new PlayStation 4 exclusive title that the studio is working on right now is not the new Syphon Filter game. Well, that was not the only information shared by “Athey” (full name: Athey Moravetz, worked at Sony Bend for Eight Years as Artist) shared. She also stated that before moving on to PlayStation 4 project, Sony Bend worked on numerous other titles for PlayStation Vita (after the launch of Uncharted: Golden Abyss) including a brand new Uncharted and Infamous game for PlayStation Vita.

According to Athey, second Uncharted game for PlayStation Vita was scrapped because Naughty Dog was worried about franchise burnout with so many games coming out so close together.

“It was going to be another Uncharted game but naughty dog was worried about franchise burnout with so many games coming out so close together, so they nixed it. We spent like a whole year di%k#&% around with different ideas and pitches after that before I left the studio. We started and threw away so many demos during that year.

Sony really wanted another Uncharted from us and tried to convince Naughty Dog to let us do it. They wanted more content for Vita. And we did make an infamous pitch at one point, too. I think that was the first pitch and demo we made after the uncharted project was canned. The infamous game would have been a vita title too.

We did a couple new IP pitches. One was steampunk but that didn’t make it very far. There was a really awesome futuristic sci if one that I really liked. We had an amazing future sci-fi city and a character that could run around and scale buildings with these jet boots, and it was awesome. We had a lot of assets done for that demo when it was canned. I was really bummed when that one got binned.

I left the studio about 2 years ago and that was when they were making the switch to Unreal 4 and PS4, instead of Vita. It was a bit of a waste since we’d put so much time and resources into making a vita engine and then only used it on one title. But a couple other first party studios used versions of our engine and we lent them support, so it didn’t totally go to waste.

I think Unit 13 from Zipper Interactive used our engine. Don’t remember who else did though. I think the shift to PS4 was a desperate bid to get something greenlit. When you go through so many pitches and get one after another tossed out for various reasons, you start trying anything.”

Athey didn’t stop there, she further went on to explained why these projects didn’t received a go ahead from the top management:

“I recall it was always upper management, demographic, genre saturation kinda crap. Like, ‘someone is already making a game something along those lines that would come out 5mo prior to your GM date’, or ‘we’ve had too many games of that sort that didn’t sell well enough’, or projections for that kind of blah blah blah…

“Also, kind of like the complaints about Hollywood only making generic formula action hits because they make money, rather than take a risk on something different that might not make money. Same thing exists in games, obviously.”

These are really some nasty allegations, but true those are we can’t tell at this moment. Tell us in the comment section below, how many of you would like to see a brand new Uncharted title for PS Vita?