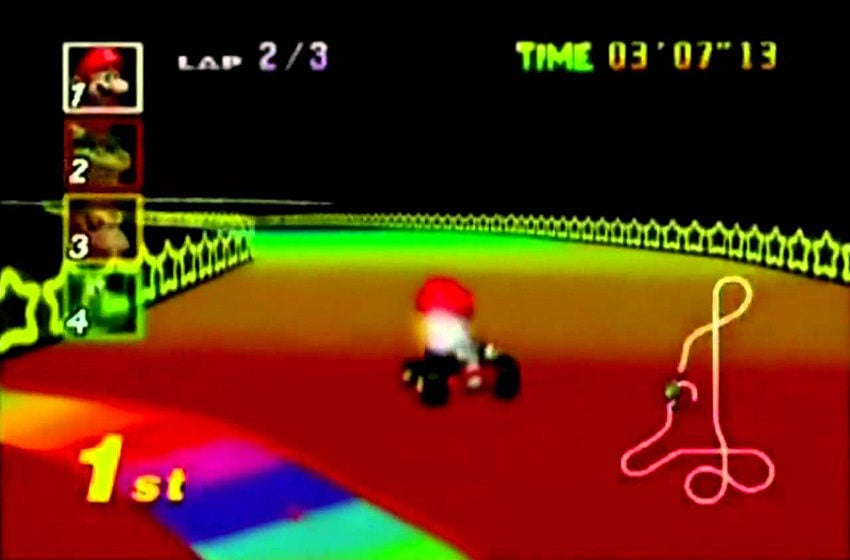 The Mario Kart series is a beloved series by all. No matter your age, you can pick up a Mario Kart game and find a track that instantly becomes memorable. Some of these tracks can surprisingly be more challenging than others, given the overall designs, game mechanics, and general competition with other racers. With all of that in mind, here are the toughest Mario Kart tracks of all time.

While this track became considerably easier when it was revived in Mario Kart 8, the Mario Kart 64 version originally was very challenging with its maze-like design, narrow roads, and the fact that until you finished the race, you had no idea what position you were in. Yoshi Valley was a unique track that challenged every player trying to get the gold in the Special Cup.

Arguably the toughest track in Mario Kart: Super Circuit, Lakeside Park, is a tough starting course in the Special Cup. Most of the item boxes are avoidable, and the course has hazards that can slow you down. Along with sharp turns, there is also a huge jump that requires a lot of speed to land. If you don’t have enough speed, you will have to go back to the first half of the course.

At first, Mario Kart: Super Circuit’s Shy Guy Beach seems simple at first glance, but then there are crabs and cannonballs to worry about alongside your opponents. Strangely enough, Mario Kart Wii brings it back and makes the course filled with more cannonballs about to go off. This is primarily a challenge for those that want to take on the time trials on the highest difficulty.

Mario Kart Wii’s Moonview Highway has one thing that can make a course extremely difficult: traffic. Want to amp it up? There’s also bob-omb cars to slow you down as well! Many Mario Kart fans have mentioned this course when it comes to challenging tracks, and it’s not hard to see why.

Rosalina’s Ice World shows that ice physics are just as tricky as any other environmental physic. It is not entirely intimidating unless you want to take risks to ensure you finish first. There is a section where there are dash panels near a cliff that could easily give you better positioning. However, being uncareful can result in you having to go back to the beginning of the area.

Super Mario Kart’s Choco Island 2 looks simple by design but is rather difficult to perfect. There are more physics than the first island where the chocolate rivers can make the drivers slide a bit too much. There are also very sharp turns, bumps, and narrow roads, which can be tough for those that like heavy racers such as Bowser.

What list would the hardest Mario Kart tracks be without mentioning Rainbow Road? This track has hardly any rails to keep you from falling to the city below. There are sharp turns throughout that will test your timing and drift skills and dash panels that encourage going faster, but could easily end with you careening off the track for the 20th time. It will take some time to practice to beat the time trial ghosts or take on the Special Cup at the highest difficulty.

Another of the iconic Rainbow Road courses finds its way as one of the toughest Mario Kart tracks ever. Again, there are no rails to prevent you from plummeting off the course, and its narrow paths allow for a lot of pushing and bumping with other racers.

This track is completely fashioned around the shape of a Yoshi. While Yoshi Valley got easier in its return within Mario Kart 8, Yoshi Circuit became more challenging because of its 200cc mode. With the constant twists and curves around this island track, good luck speeding around without falling into the water or getting a distinct slowdown from the grass.

Neo Bowser City is definitely an interesting track to have a Bowser theme. Many sharp turns particularly make the 200cc version in Mario Kart 8 frustrating (much similar to Yoshi Circuit). You will often find that every racer on this track will be packed together, so one mistake can set you very far back in position.