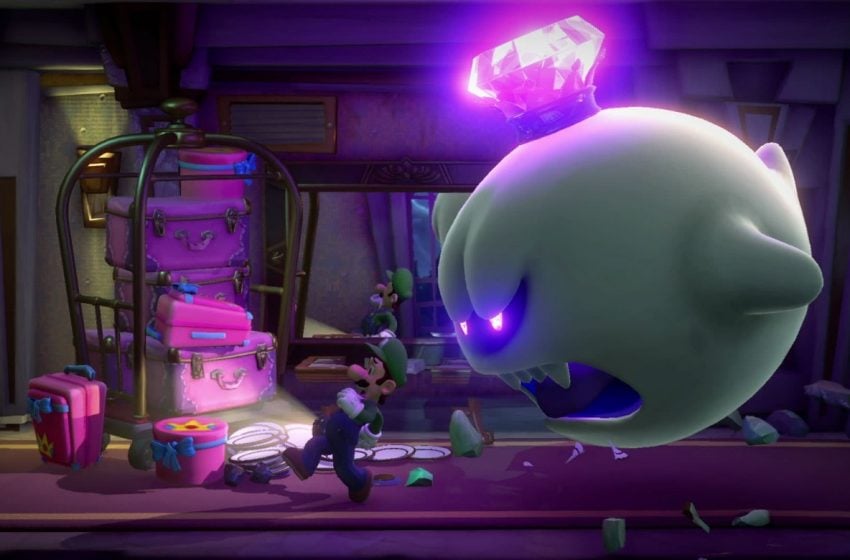 Luigi fans have had to wait a long time to get their hands on the latest entry in the Luigi’s Mansion series— but it has been worth the wait.

Six and a half years after the release of the mixed reception of Luigi’s Mansion Dark Moon, Luigi’s Mansion 3 for Nintendo Switch takes players back to the series’ humble beginnings. The series refocuses more on puzzles, exploration, and boss battles with great ghosts and more charming quirks that many fans associate with it.

Luigi’s Mansion 3 is a return to form and is another classic on the Nintendo Switch’s ever-growing library for players to dive into.

Luigi’s Mansion 3 begins with Luigi, Mario, Peach, and several Toads getting invited to a luxury getaway for the night. Everyone is looking forward to relaxing activities and a chance to unwind after the dozens of countless Bowser boss fights. However, we can’t take things at face value.

It turns out the paradise getaway has turned into a real nightmare when King Boo announces his return and ghosts rush onto the scene. King Boo is seeking revenge against Luigi for trapping him in a painting all those years ago. Now, with all of his friends captured, Luigi is the last hero standing. It’s is up to him to save the day and rid the hotel of ghosts and ghouls alike.

Luigi has to save the day using a brand new Poltergeist vacuum cleaner given to him by Professor E. Gadd. He also receives a brand new lineup of gadgets to use against the ghosts, along with Gooigi, a goo-like clone of Luigi. These new critical tools add another layer of depth to the series’ puzzle-solving mechanics, and it’s up to players to climb the terrifying tower to solve each one to confront King Boo at the end.

The adventure is a charming affair with a more linear formula than the first Luigi’s Mansion game on Gamecube. You enter a floor, find your way to the boss, beat the boss, and go to the next floor. You repeat this process until reaching the end of the game. Still, the levels are distinct and well themed to make each floor unique. Some of the puzzles offered in the game are challenging, even during the earlier stages. These earlier challenges give a good idea for what players can expect for a majority of the adventure.

Plenty to Vacuum Up

The new tools and abilities Luigi receives are set and ready to go to assist him in ridding the hotel of ghosts and ghouls alike. Among them are a series of new abilities, such as Slam, which bash ghosts down to deal massive amounts of damage. There’s the Suction Shot ability, which fires a suction cup projectile that sticks to an enemy’s defensive items, like a shield, and rips it off. Players can also use this ability on environmental objects to advance through the game. The Burst ability is going to send a powerful shockwave around Luigi to push back foes. All of these abilities are vital to exploring and fighting, and players are going to have ample opportunities to master each one during their journey.

Even after you complete the main story (which takes a decent amount of time), you are never really out of things to do. Each floor has a series of collectibles players have to go out of their way to discover and collect, like hidden Gems.

The Boo’s from the first Luigi’s Mansion on Gamecube make their return. They’re hidden throughout the game, forcing players to rely on listening for the rumble of their backpack to get alerted to their presence. There are many of them littered throughout the game, and gathering them all up is no easy task.

Players have the option to play through the game with a buddy with the addition of a multiplayer co-op option for the main story. You and your teammate can work together in the local co-op with one of you playing as Luigi and the other Gooigi. You’re both going to tackle these tough challenges together, using your character’s abilities to progress through the terrifying tower.

The multiplayer component also expands to various new online modes. You can choose to play a series of mini-games or team up with other players to take on a series of floors in Screampark. Each level has a unique objective players must complete before moving on to the next one, similar to the main story of the game.

There aren’t any glaring issues with Luigi’s Mansion 3 that we were able to find during our playthrough. Only small piddling issues that annoyed us rather than upset us.

A large pet peeve with this game revolved around how to vacuum works. The controls were quite janky at times, and I found myself turning the weapon to the incorrect direction due to the camera’s positioning. It’s hard to explain, but it didn’t feel right.

Some of the puzzles, such as the classic Boo’s, are also incredibly hard to solve. The game gives you no sense of direction on what to do with them. This headache carried over to the Gem puzzles. They were insane to complete and took an extra level of thinking and planning to wrap up. It’s likely some players are going to rely heavily on online guides to finish them.

A glaring fact was there was little that brought me back to the title, other than wanting to speedrun through it. I found little reason to return to the game after fully completing it.

Players can choose to rush through the game pretty quickly at a decent pace and have a good time. However, it’s when you go off the beaten path and try to find out what else the game has to offer is where you’re going to run into these issues.

Other than those doubts, however, Luigi’s Mansion 3 is solid, looks great, and is very charming. Props to the team over at Nintendo for making a great title.

I know a lot of people were skeptical about Luigi’s Mansion 3 because everyone has a favorite game in the series. Some people prefer Luigi’s Mansion on Gamecube’s free roam creepy adventure, while others prefer the mission structure and gameplay of the second game.

The third entry represents the best of both worlds with Nintendo pulling the best parts of the games into one complete package. This melting pot of a title is sure to excite any fan of the series as a whole. It is a marvelous game and another gem on the Nintendo Switch’s ever-growing library.

My only issue comes from the game’s release timing. It is set to come out two weeks before Pokémon Sword and Shield, where I feel it will get lost while Nintendo and The Pokémon Company try to push their upcoming title.

Honestly, though, Luigi’s Mansion 3 should not get missed or thrown into a backlog. It is a near-flawless game brimming with character, and I implore everyone not to give it a miss this holiday season.

You won’t regret this purchase, girls and ghouls—I assure you.

Disclosure: Our review copy of Luigi’s Mansion 3 was provided courtesy of Nintendo.