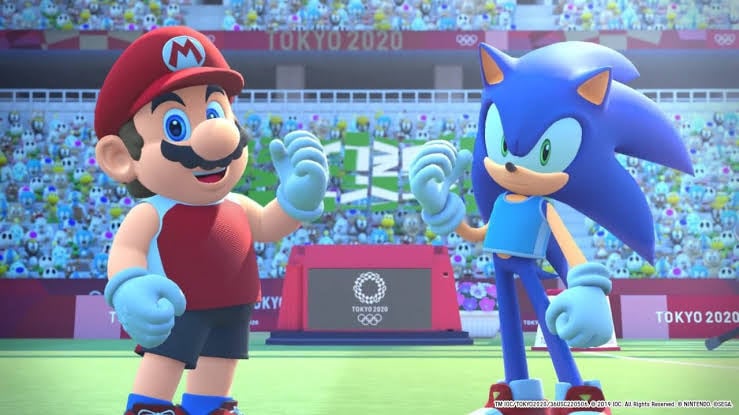 Mario & Sonic at the Olympic Games Tokyo 2020 can be broken down into two different games. The campaign and the general party game are very separate things that just happen to share the same title and type of activities. Both center around the concept of short, taxing challenges representing the various sports in the Olympics, but each is worth discussing on its own merits.

Frankly, when I first realized there was a story campaign, I wondered how necessary it actually was. Surely Mario & Sonic at the Olympic Games Tokyo 2020 is a party game? But to my surprise, after playing through it, I thoroughly enjoyed the experience. The story centers around infamous Sonic villain Dr. Eggman attempting to trap Mario and Sonic in a gaming console he created based on the 1964 Olympics in Tokyo. Things go wrong, and both Eggman and Bowser are dragged in with them.

From that point onward, it’s a race for both parties to try and escape, but, obviously, Eggman and Bowser plan on leaving Mario and Sonic behind. Meanwhile, in the real world, Luigi and friends are exploring the Olympics and Tokyo in the present day, attempting to find a way to bring their friends back. You jump back and forth between both groups, playing through events and meeting new characters along the way. While it can hardly be called deep, but it is smart, giving the game a way to celebrate not just the upcoming Olympics, but also the Olympic history of Tokyo.

The only knock on the 1964 sections is that the events themselves lack some of the panache of the modern-day ones. The limitations of representing old tech mean they are more straightforward, but I actually enjoyed this. It reminded me of the games I spent hours playing as a kid, like Daley Thompson’s Decathlon.

Because Eggman is apparently no fool, he built in a way to escape from his own trap, just in case something did go wrong. This boils down to needing to win events and get gold medals. It’s a special, Saturday-morning cartoon kind of crazy, but none of that matters. It gives you a reason to take part in events, or race the bullet train, and explore the world, and that is all you need.

In the end, I found the premise of the campaign quite endearing–the characters can just walk up to an event and decide that they are taking part. I’m not sure why I find it so charming; I think it just presents the Olympics as something that is open and accepting, which perhaps is a fine way to promote the Olympic spirit, if not the reality of the hard work and dedication required to get there and compete.

One interesting thing is the presence of small information nodes strewn around the game’s different areas. They teach the player facts about Japan, Tokyo, and the Olympic games and its history. It’s a fun little addition and keeps the game grounded and connected to its setting. I had far more fun with this mode than I expected to, and the retro style of the graphics and music really got me in a nostalgic mood. These were the types of games I would convince my family to play with me when I was a kid, and it felt great to capture that feeling again.

This side of the game allows you to quickly and easily jump into events with your friends and family. Skateboarding, boxing, gymnastics, the 100-meter sprint, long-jumping, and many more make an appearance. They are each suitably different from each other in both presentation, demand, and challenge, so that none of them really feel unnecessary.

You can choose between events from 2020 and events from 1964, and there are even a few special modes that have nothing to do with the Olympics, but are fun in their own way, in the form of Dream Racing, Dream Shooting, and Dream Karate.

The game supports shared local multiplayer, local play via connected consoles, and online play. There is also a range of controller options, and each Quick Match has three difficulty levels.

Some of the events have a steeper learning curve than others, which makes for a good array of challenges. Skateboard and boxing are quite easy to approach, while events like Gymnastics and the Discus Throw are more difficult to wrap your head around. The whole package is very approachable, however, and it would be extremely easy to have some fun with friends or family who rarely play games. Online play even has a Ranked mode, if you are wondering how you stack up against the rest of the world in any event.

The one thing I couldn’t find was a way to organize a tournament. It would be nice to be able to select a number of players, and events, then just proceed through them all with the game keeping track of where everyone placed and announcing winners at the end. Its absence seems like an oversight and is a feature that would have added to the game.

How It Looks, Sounds, And Runs

Graphically, there are no real surprises here. The 2020 Olympics content looks very much in line with other Switch titles, while the 1964 Olympics content in a nice throwback to classic Nintendo graphics. The music is fun, adding some nice tempo to events, while being relaxed as you explore the world of the game. It also ran just fine for me, with no noticeable frame issues or slow-down.

Mario & Sonic At The Olympic Games Tokyo 2020 surprised me with how much I enjoyed it. Games like this boil down to how fun they are to play, especially in a group, and it will really shine as a party game. If you plan on watching any Olympic events with friends or family, there are much worse things to do in the downtime than have some fun with this title. It doesn’t do anything particularly revolutionary, but what it does do, it does very well.

Some people might struggle with motion controls in some events, and it is possible that this aspect could have been worked on a little more for some of them. With accessibility being an issue, it is also unfortunate to see the “Buttons Only” control option being overridden at points.

Mario & Sonic at the Olympic Games Tokyo 2020 has oodles of charm, but it doesn’t necessarily bring anything new to the table for people who have played earlier installments in the series.

Disclosure: A review copy of Mario & Sonic at the Olympic Games 2020 was provided courtesy of Nintendo.