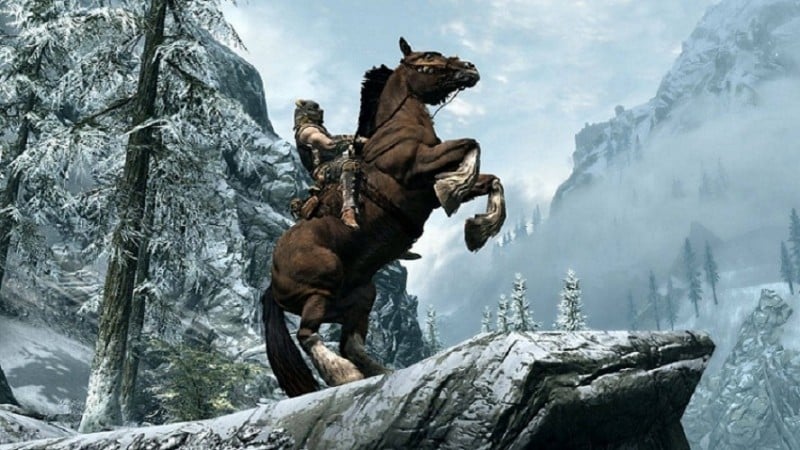 The world of Skyrim features a lot of weapons which can be used during the battles and take down the enemies and bosses, so if you’re as big a fan of hitting things (very hard) as we are, you’ll want to know the best weapon for the job. So we’ve taken out the hard work and made it easy for you with 20 of the best weapons in the game, where and how to find them, and their stats.

We have split the list into the best weapons for each category, such as bows, axes, and so on. We would recommend trying each type and see what works best for you, but what you will see is the statistically best weapons you can find in each category.

Location – Completing one of Dawnguard’s Main Quest, “Touching the Sky,” the bow will be available after defeating Arch-Curate Vyrthur.

It grants you 20 points of sun damage, which triples when hitting undead targets. For better results, you can use also combine it with Sunhallowed or Bloodcursed Arrows.

Location – This Crossbow is purchased from Sorine Jurard in Fort Dawnguard after completing all of the “Ancient Technology” quests.

The Enhanced Dwarven Crossbow is a Two-Handed Crossbow good with long-range that deals excellent damage while ignoring 50% of enemy armor.

Location – This bow is obtained during the Forbidden Legend quest, where Sigdis Gauldurson in Geirmund’s Hall drops it.

The Gauldur Blackbow is a bow that deals with the absorption of Magicka, meaning pesky mages hold no power over you. It is more effective at level 36 due to scaling, and it gives some sweet Dwarven perks too.

Glass Bow of the Stag Prince

Location – This bow is found for sale at Falas Selvayn at the Ramshackle Trading Post, though he won’t offer it every day. If you’re feeling brave, you can pickpocket it from him on those days.

The Glass Bow of the Stag Prince is a bow that blesses you for every 20 animals that you kill with 5 point boosts to stamina and health if equipped, to a max of 25 (for 80 kills), which is a seriously good boost. It also provides you with Glass Smithing perks.

Location – This Bow is given to you by Karliah as a reward for completing the Thieves Guild quest, “Blindsighted.”

This cool looking bow deals frost and shocking damage to targets which scales with your Dragonborn level, with the biggest increases capped at level 46.

Location – Found in Dwemer Ruin of Arkngthamz during the Dawnguard quest “Lost to the Ages,” where the player can obtain it from the chasm with careful footwork.

One of the fastest bows in Skyrim as its innate ability allows you to fire off arrows 30% faster than the standard speed, which makes it reasonably devastating at any point in the game. Its base damage is significant too.

Location – Next to the remains of Gratian Caerellius in Bloodskal Barrow during the quest “The Final Descent.”

The Bloodskal Blade is a Two-Handed greatsword that sends out horizontal and vertical energy blasts to the tune of 30 damage that travels around 15 feet and even has a distinct advantage against smarter enemies of moving through walls. No hiding from this!

Location – Inside the tunnels under the Riftweald Manor in Riften during “The Pursuit” quest.

Chillrend is one rather chilly weapon as it deals 30 points of frost damage its target while also causing paralysis for 2 seconds. It’s also affected by the Augmented Frost perk in the destruction skill tree, meaning an extra 25% frost damage from the base stat.

Location – On a table in the atrium, left of the main chamber in Sky Haven Temple during “Alduin’s Wall.”

The Dragonbane is one cool looking one-handed sword. It deals a lot of damage to Dragons that scales with level increments, with a whopping 40 points of damage extra to them at Dragonborn level 46, while also dishing up 10 additional shock damage to everything else. Unfortunately, it can’t be disenchanted, though.

Location – Defeat Mikrul Gauldurson in the ruins of Folgunthur during the “Forbidden Legend” quest for the sword.

Gauldur Blackblade absorbs health from your enemy and scales with Dragonborn leveling, with the biggest effect coming at level 36, where you’ll suck 25 health per shot. A great sustain weapon.

Location – Defeat Harkon during the “Kindred Judgment” quest, and it’s yours, or pick point it if you’re feeling dangerous.

The Harkon’s Sword is handy if you’ve decided to take the Vampire route as the blade sucks out 15 points of health, magicka, and stamina per hit, and even comes with a cool black border effect. The sword will run out of charges, though, so make sure to stock up on soul gems.

Location – On the skeletal remains of Miraak upon his death at the end of “At the Summit of Apocrypha.”.

Sucks stamina from the target while also being very cheap to recharge the sword. One petty soul gem is usually enough to charge it back up close to full, so the level of entry is low while providing some substantial damage.

By themselves, each sword is pretty weak but dual-wielded, Soulrender, and Bloodscythe produce the goods with up to 40% extra damage dependent on the number of Deathbrand armor items that you’re wearing, while also offering an armor boost to compensate for the lack of a shield.

Location – On the ship The Katariah, which can only be accessed during or after the quest, “Hail Sithis!”

Do you want to cause your enemies to stagger continually? Then the Windshear is for you because every successful hit will do just that. Borderline broken when 1v1, and only stopped by Tower of Strength or Reflect Blows from the Heavy Armor skill tree.

Location – Found around Skyrim from level 44 onwards, with enchanted versions from level 47, or with level 90 Smithing.

A powerful two-handed Warhammer, the Daedric Warhammer deals a meaty 27 damage. Add some enchantments to that sucker, and you’ve got yourself a powerful basher.

Location – A reward from Daedric Prince Malacath for completing “The Cursed Tribe” quest.

The Volendrung takes no prisoners. If you hit something with it, they are going to have 50 points of Stamina taken from them. 50!

A fairly meaty Warhammer on its own, the Dawnguard Rune Hammer allows you to place runes on a surface that then sends a 50 damage inferno at any target coming close to it.

Location – In the southwest of Solitude, it can be found next to the body of Rohd at the end of Liar’s Retreat.

The Longhammer allows you to swing it 30% faster than a regular Warhammer, with the upside that this effect does not count as an enchantment, so the upgrade potential is excellent.

Location – Reward for completing the “Death Incarnate” Dark Brotherhood quest, by pickpocketing or by killing Astrid in the Abandoned Shack during “With Friends Like These….”, though killing him will fail the mission.

One for those playing a mage and specializing in the Destruction skill, this little blade absorbs 10 health from its targets. Perhaps not the best enchantment, but it also starts with strong base damage, so it’s still worth experimenting with.

Location – Found at random after hitting level 46, with enchanted versions found at level 47. It can also be crafted at Smithing 90 and Daedric Smithing, or the Atronach Forge with a Sigil Stone and 90 Conjuration skill.

The Daedric Dagger might seem like a bog-standard blade, but it’s relatively light, had decent damage, and isn’t the most difficult to obtain. The textbook definition of a solid choice all around with the potential to improve as you wish.

Location – Found after completing the quest “Pieces of the Past,” but only if you decide to kill Silus Vesuius.

Mehrunes’ Razor offers the Dragonborn a chance of 1.98% to kill instantly. Those might seem like long odds, but considering that it will one-hit kill almost anyone in the game once every 50 hits, its slightly lower damage may be worth the pay off to some players.

Location – In a radiant location during the “Lost Relic” quest.

If you’re a fan of hacking down undead hordes as you go on your travels, consider packing the Dawnguard Rune Axe. Not only does it give an extra 10 Sun damage, but you can add up to another 90 to this, with an extra point for every undead you fell. That’s a whole lot of Sun damage per strike.

Location – Looting the keepers in the Soul Cairns, though, can also be crafted and found randomly.

Dragonbone Battleaxe might seem like an odd pick, but this uncommon Axe packs a bigger punch than the Daedric version of this weapon. It’s easier to obtain too, so if you have smithing at 100 with the Dragon Armour perk, you don’t even need to worry about finding one.

Location – During the “Silenced Tongues” quest, it’s in the ruins of Volunruud after defeating Kvenel the Tongue.

Those Nords sure know how to craft a battleaxe. One hander Okin is another to add to the angry arsenal, with 10 extra frost points of damage that also bites 10 points of stamina of the unfortunate recipient too.

Location – Can be granted as a reward for killing Barbas from Clavicus Vile in “A Daedra’s Best Friend,” though Barbas must be killed with the axe.

Want to bring enemies to their knees in fatigue? Easy, swing the Rueful Axe at them and watch as you take chucks of 20 stamina off with each hit.

Location – Retrieve all of the Wuuthrad fragments during “Glory of the Dead,” and you’ll be able to pry it from the hands of a statue at Ysgramor’s Tomb.

Elves beware. If the Dragonborn has Wuuthrad in his hands, it’s probably best you run now before you’re hacked to death. Damage towards the Altmer, Bosmer, Dunmer, and Falmer races is amplified to 1.2x power, and this doesn’t even count as an enchantment! Huge potential to be one of the most powerful weapons in the game.

Location – Completing the Daedric Quest “The House of Horrors,” which is started by entering the abandoned house in Markarth. It will initially be listed as a “Rusty Mace” placed at the Altar of Molag Bal, so don’t discard this.

The only mace you may ever need. Base damage is perhaps lacking, but 25 points of Magicka damage with 25 stamina damage, AND a cast of Soul Trap makes this a super attractive pick for everyone, especially enchanters for the soul gems, and anyone able to pick it up early.