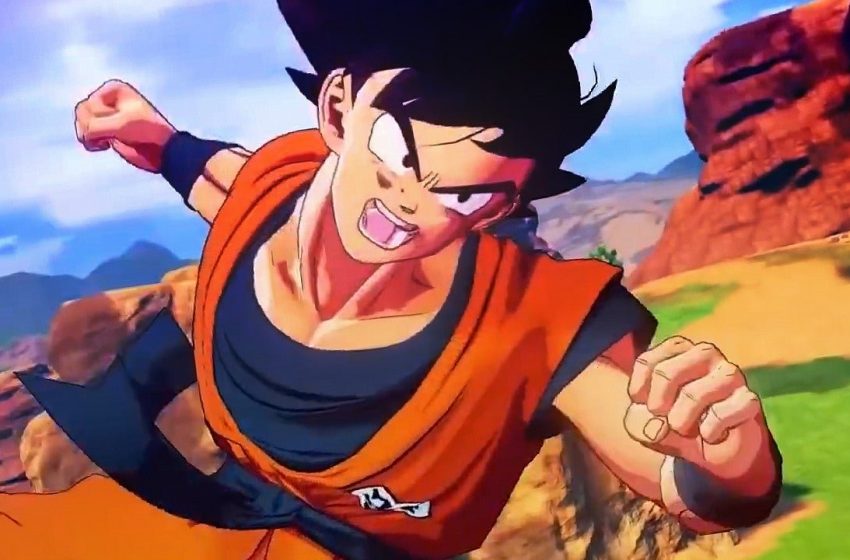 Once you’ve played almost any Dragon Ball game with a story mode, you’ve likely been through the story of Dragon Ball Z. But Dragon Ball Z: Kakarot is a rare instance where the formula works once again because the people behind it, Bandai Namco and CyberConnect2, love the source material and were willing to flesh out many of the smaller details.

While we think the name doesn’t fit what the game actually is, Kakarot is a fun experience that helps build out the world of the show in a way that has never been done before. And though the overworld was ambitious, it works, and it’s only marred by a few basic flaws. 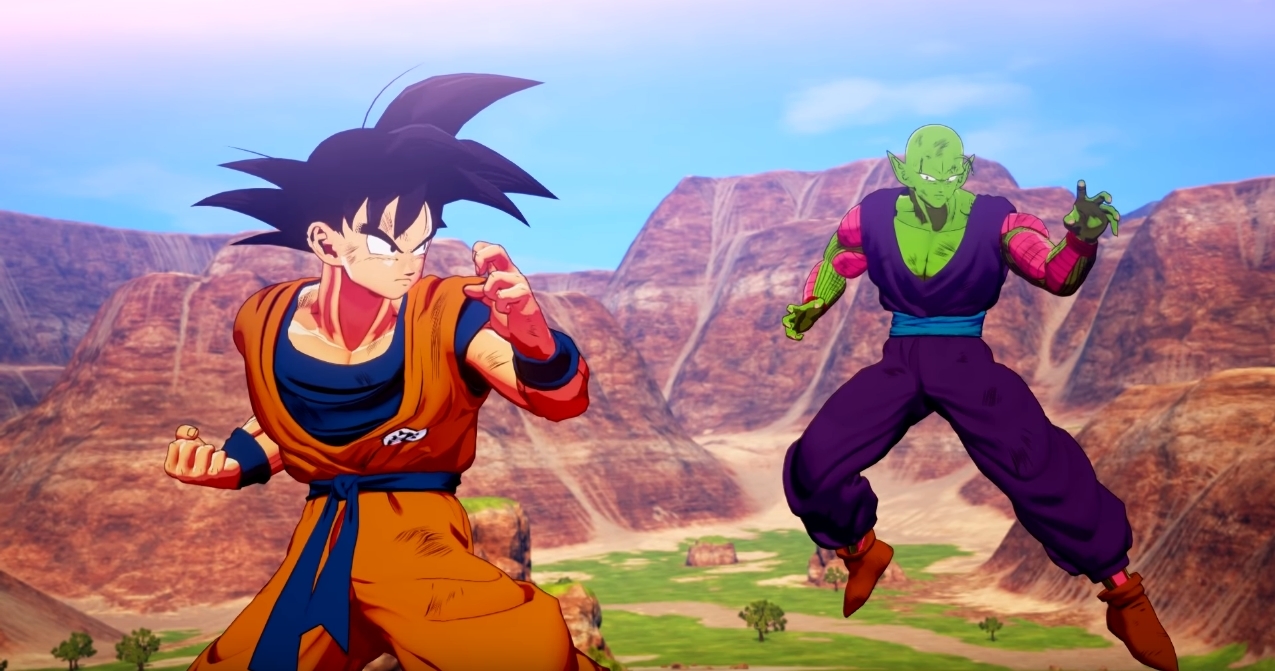 From the moment you start the game, Kakarot sets out to reignite the feeling you had when you first watched the anime on TV with a mixture of the original opening and moments of gameplay to composer Chiho Kiyooka’s now-classic “Cha-La Head-Cha-La” theme.

After briefly introducing you to Goku and Gohan, the game tosses you into a tutorial that lays out almost everything you need to know about the battle system, though it doesn’t do a great job of teaching the finer details.

The combat is smooth and feels a lot looser than in the Xenoverse games, and that carries over to the overworld controls, which can feel floaty once you first take control of Goku outside of a fight. Neither the battle controls nor the overworld controls feel great at the start, but the more you play, the better they start to feel—outside of the flying up and down commands, which just stink. 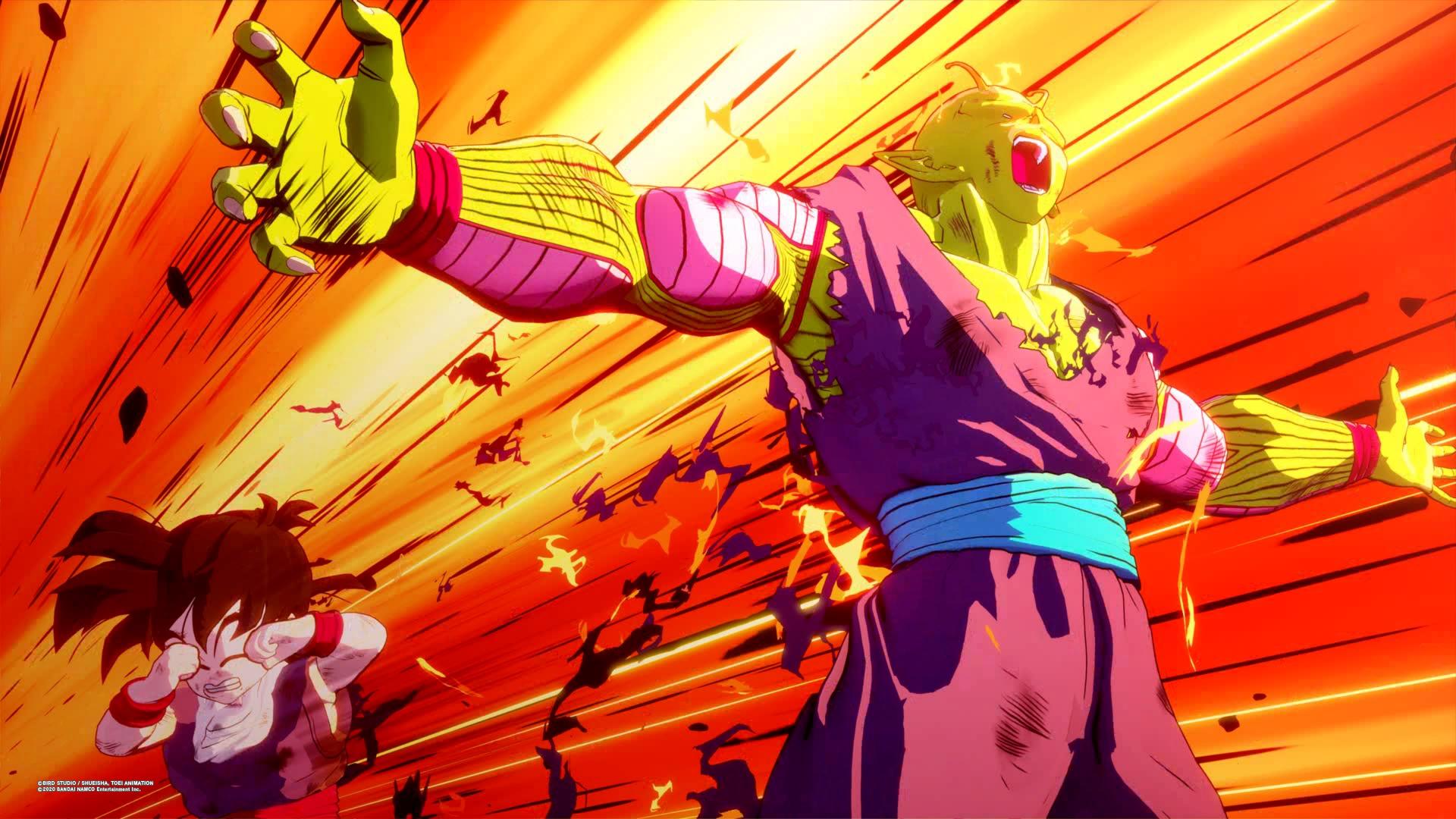 Things can get overwhelming at first, as the game introduces you to systems like cooking, ingredient gathering, and the Community Board right out of the gate. But just like the combat, it is all simple enough to grasp after a brief overview.

Cooking and eating meals made from the ingredients you find and hunt provides temporary boosts to specific stats depending on the meal, but also permanently increase stats such as health and base Ki power.

The Community Board is an interesting mechanic where, as you progress through the story, you earn Emblems from various characters. Each character has a set value that can be applied to one of seven different boards, with each board providing useful stat boosts and higher chances for extra effects, like cooking more than one of a meal when you select it.

Regarding difficulty, the game is really easy up until you reach the Raditz fight, which shows that the scaling has a good curve. The game really tests you during that fight, making you feel like you have learned a lot in your short stint exploring and training in the world.

A Living World (That Hasn’t Been Wished Back to Life) 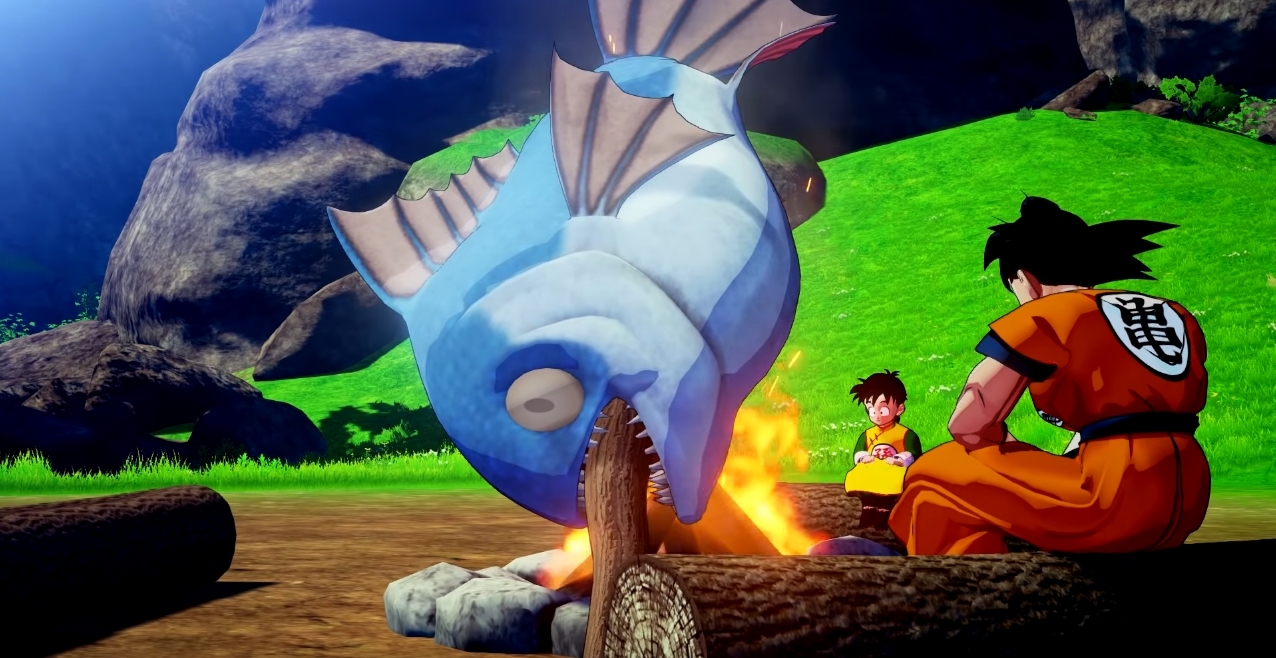 You won’t be free to roam the various overworld maps until after a few missions, but once the world opens up, it’s pleasantly surprising just how detailed and lived-in it is. One of the weakest parts of the Dragon Ball franchise is the world itself, since it’s mostly just used as jumping-off points for fights. But in Karakot, the developers went to great lengths to construct a varied landscape with plenty to explore.

In that giant overworld, the game runs well, for the most part, outside of a few NPC models looking a bit choppy when they are far off in the distance or first loading in. There’s rarely any slow-down while flying across the map at full speed, which is impressive.

For those who, like us, love the original Dragon Ball series, there are plenty of returning characters from Goku’s younger days too. You will end up in side quests for people like Launch and Nam, while also running into people like the World Tournament Announcer and Pilaf’s gang, which just adds to how alive each part of the world feels. 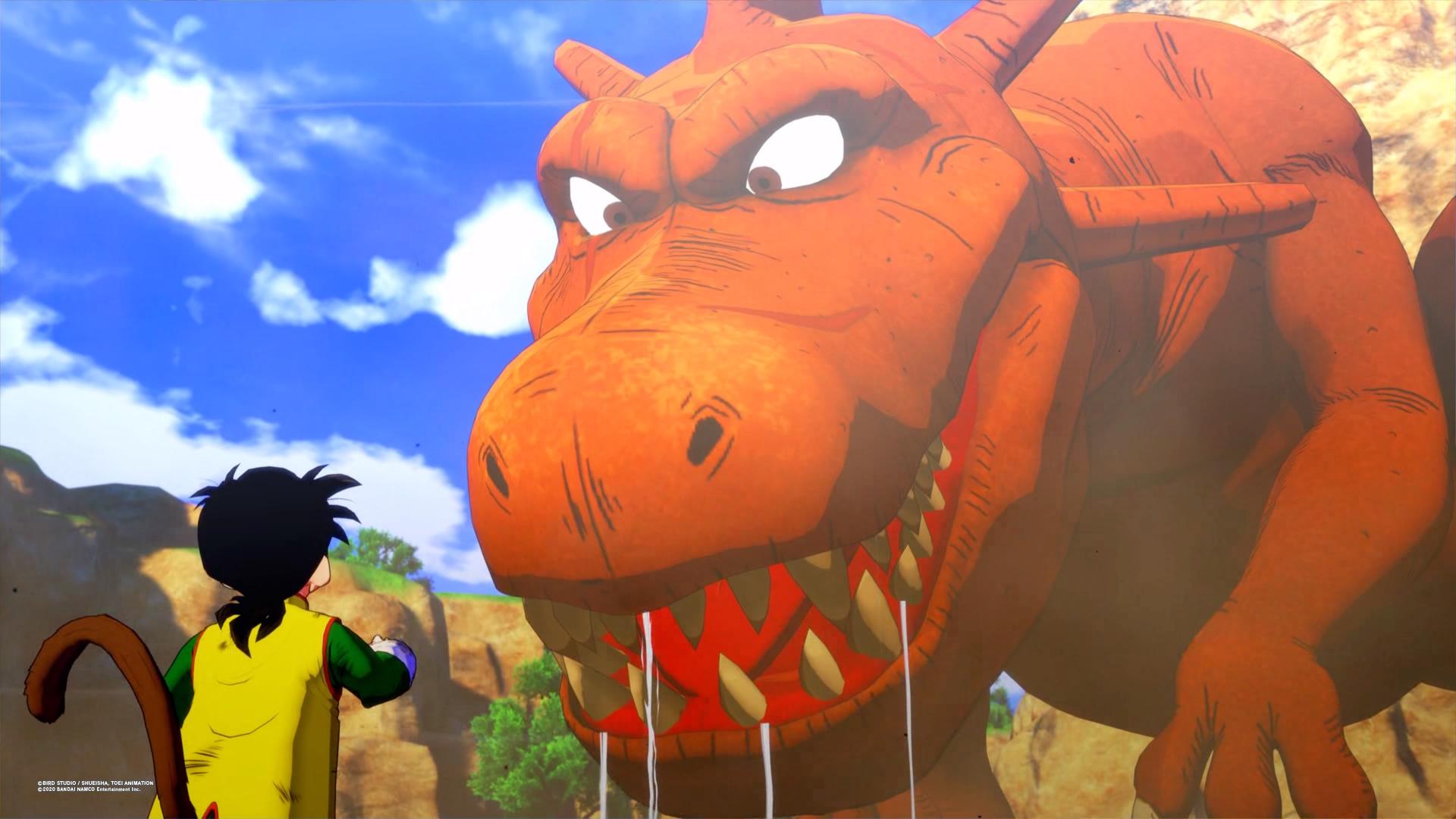 However, it’s not all perfect. Generic Red Ribbon Army robots are slapped into every area, and they get very old after about the 15th time they give chase as you try to explore. They aren’t challenging, they have no narrative reason for being there, and they only serve as an enemy in the overworld that isn’t just wildlife. It also doesn’t help that they repeat the same two voice lines every time you fly close enough.

Likewise, fighting dinosaurs is extremely underwhelming and simply consists of flying above them and blasting them with small Ki Blasts until they fall over.

There is nothing special about most of the tracks that play during the first 10 hours of the game, either. There are new arrangements of the original anime soundtrack at key moments, but outside of that, most tracks are completely forgettable.

But the biggest disappointment by far is that you don’t actually get to follow the entirety of Goku’s journey. All of the story that takes place in Other World is told through cutscenes and text boxes, which means no running Snake Way or interacting with King Kai’s planet at all. This feels like a huge missed opportunity and could have added an extra dimension that most DBZ games don’t touch on. 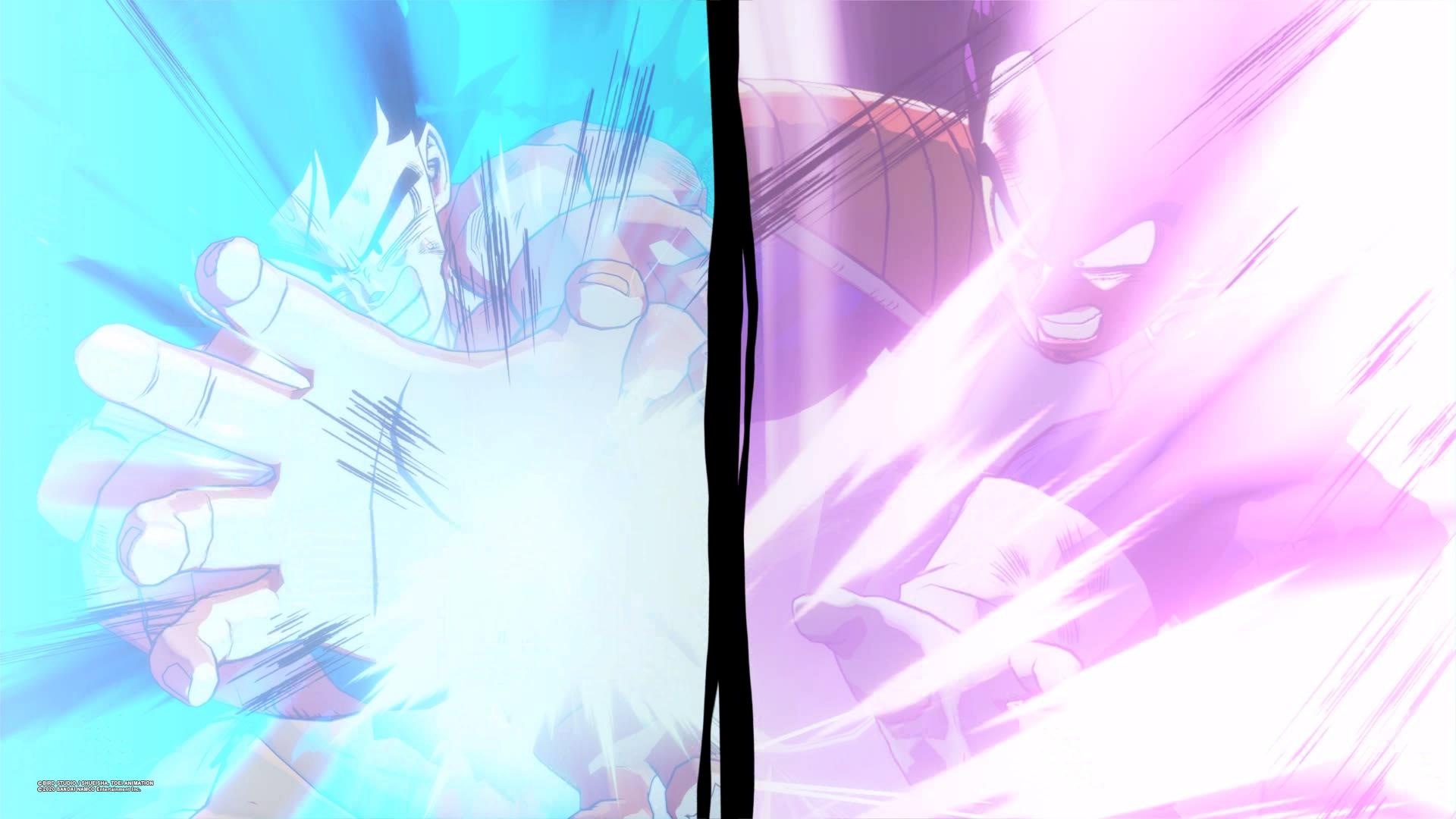 Dragon Ball Z: Kakarot looks incredible and runs very well, with very few instances of lag or glitches. The developers did a stand-up job making the world of Dragon Ball appear lively and vibrant, which made us want to spend extra time exploring every area and inhabiting the locations that get screen time in the show.

And while the generic enemies you fight in the overworld get repetitive, and the hunting mechanics are very surface level, the game does a good job of working around that by adding interesting side quests with many returning faces.

Overall, Dragon Ball Z: Kakarot is a fun experience with fluid combat that improves on almost every aspect of the franchises’ recent games, with a system that makes you feel as if you are learning and growing as the game progresses—and not just in an artificial, numbers-based way.