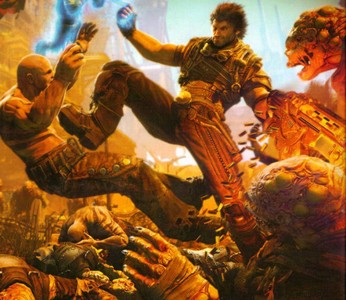 The First Person Shooting game market now a days are quite saturated, hence its becomes difficult for any latest release to stand out, however this issue does not affect People Can Fly’s Bulletstorm, as it present even a small FPS element perfectly from start till the very end. Bulletstorm doesn’t offer much in terms of innovation, but there are enough fun elements incorporated to keep fans engaged.

Bulletstorm plot take place in 26th Century, where the protection of Planets is in the hands of black ops army known as “Dead Echo”. In the game, player assume the role of Grayson Hunt. The story follow Grayson Hunt and his partner Ishi Sato, both of them were dishonorably discharged from Dead Echo after they were betrayed by their boss General Sarrano. Ten year later, in an attempt to take revenge with Sarrano and his army, Hunt’s and Sato’s ship crash-land on the planet called Stygia (full of flesh eating plants, criminals, monsters and many more).

Now apart from making their way out off the Stygia, Hunt and Sato also need to battle out with General’s forces, who also crashed on the planet after Hunt’s Attack. In their journey of survival they will be joined by Trishka Novak, a women with a dark past behind her.

Talking about the Bulletstorm controls, developer has kept everything simple, most importantly familiar. In the game, player make use of L stick to move around, whereas R stick is used moves the camera. X perform all the non combat character motions like, running, climbing, sliding etc, while Square is used to perform all interactive moments such as flipping, rope climbing. All these controls are very easy

Regarding Combat controls, its even easier. The energy leash is activated by “L2”, while weapons secondary functions is activated with L3 and R3 respectively. Controls details above clearly shows that there’s nothing revolutionary, but the main point is to combine all three of your attacks to produce a very absurd and brutal combos.

The one thing that makes Bulletstorm sand out game is its Echoes mode. Each echo in the game allow players to replay a particular segment of the game with a set start and end point. Gamers will be able to move through it as soon as possible to get some extra points in their kitty, however their real goal in this achieve as many skill-shot as they can in that time period.

Talking about gameplay, players will be doing lots of running, shooting and finding every possible way to kill their opponents (if explorer properly there are tons of way to do this), all while playing mission after mission in a linear campaign. To entertain the campaign offers some boss fight, however they are mostly easy and pretty unoriginal.

Regarding weapons, during my entire gameplay i hardly made use of my entire arsenal, flare gun and shotgun of mine played a role of second fiddle and supported my fully-upgraded Bouncer Cannon excellently.

Looking at Bulletstorm multiplayer mode its get very clear that developer main focus was the single player campaign, as there only multiplayer mode included in the game is called Anarch, its put you against three other player to battle out against hordes of enemies. Nothing new and original, however as said “ITS BETTER HAVING SOMETHING THAN NOTHING”.

The only flaw that is there in single player campaign of Bulletstorm is the uselessness of non-player characters in the game, its accepted that they draw fire from the bad guys, but players can’t depend on them alone to save them in a tight situation. All long as player keep this in their mind, its good for them as nobody will want an NPC to take away all their skill-shot bonus point. The only advice i will give you is Think of them only as a sidekicks nothing else.

Bulletstorm as a whole is an excellent game, however there some tame campaign, crass acting and dialogue, and limited multiplayer. Bulletstorm visual and graphics and over the top gameplay will definitely satisfy FPS gamers who are just looking to have fun and kill lots of enemies.