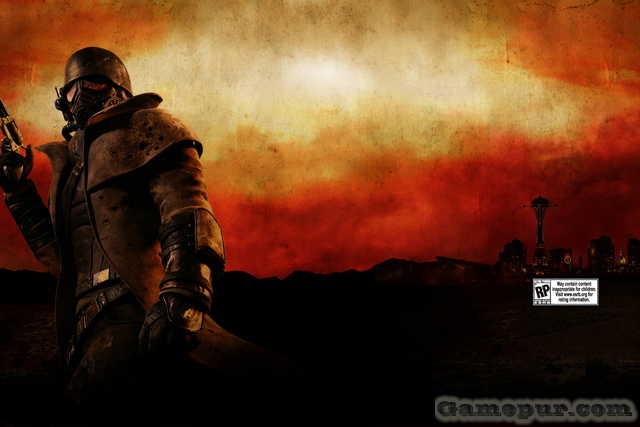 Fallout: New Vegas is a upcoming role playing game title and is not a sequel Fallout 3, it is an independent product, the events that occurs in the game follow three year after Fallout 3. It has been slated to be release on 19th October 2010 in North America and on 22nd October 2010 in Europe.

Looks Identical to Some Extent:

Fallout: New Vegas is technically and mechanically almost identical to the previous, however the Creative Director Chris Avellone reveals a number of improvements and additions to character development of Fallout: New Vegas story, We still feel that this is not quite the same game It takes place three years later. The Mojave Desert, although its landscapes are always post-apocalyptic, is nearly as devastated as the capital loss and wastelands. Buildings are intact, there are some patches of blue sky, shrubs and bushes dot the landscape, and a little warmth and color has crept into the scenery.

While Fallout 3 You did emerge from the underground shelter in a hostile world, as a visitor from another planet New Vegas makes you a survivor of the surface an active member of a kind of society, and it begins to surround yourself with some friendly faces. You are a messenger left for dead by bandits, but a mysterious robot named Vic – posting it on his chest Vegas Vic, the cowboy cartoon mascot of the city- found your body and transports you to Dr. Mitchell it takes you back to the living world.

The rapid process of character creation allows you some additional options. The skills, such as characteristics, are all familiar and include combat skills, such as handling explosives, or social skills such as barter. Costume jump retrieved from the shelter and personal interface Pip -Boy will make you feel at home, and you are sent to the village saloon Good Springs (it’s a place that truly exists, Like most places in New Vegas) to meet a hunter called Sunny Smiles that will guide you through the tutorial quests.

New Vegas, which agrees well with its geographical location, gives the impression of a Wild West frontier town. Tornadoes dust cross your path, an old prospector named Pete Easy swinging in his rocking chair on a porch, and Trudy, the proprietor of the saloon downstairs from you, wants help against the bounty hunter Joe Cobb and his gang extorting the city. All this happens after you went hunting geckos (one of many references to Fallout 2 Obsidian has crept into the game) to learn, or relearn, how does the real-time combat and first person view with breaks offered by the tactical optional VATS.

In the prologue carefully prepared, it is in the zone a low level weapon skill for each weapon and call options for all possible powers of persuasion in the mission to defeat the gang Cobb. It introduces new special abilities unlocked with each close combat weapon – a 9-iron golf club makes a sudden destructive called “Warning!” – the new and most important, New Vegas, a reputation system.

A new entry in the Pip- Boy gives you an advantage in a place where a particular group if your reputation with a faction change. If you beat Cobb, you become “Accepted” in Good Springs -‘the people have decided to accept you because you are a helpful nature. Ultimately, this system comes into play in the story’s main battle between the militia of the New Republic California ( NRC) , based in McCarran , and a group of slave called Caesar’s Legion. If you are familiar with Vegas, you can probably guess where you will find their headquarters. Whichever side you choose, the other will be your main enemy in the game.