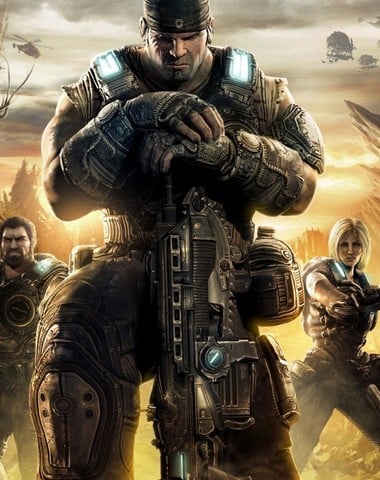 Finally the last chapter to the epic trilogy of Gears of War is coming to an end. Since the launch of the series way back in 2006, gamers have fell in love in the story of lead character “Marcus Fenix” and his friend “DOM” as they save the universe from Locust. As epic and super heroic journey of “Marcus” is finally coming to an end, will Gears of War 3 be remembered by fans as a groundbreaking game for a long time period?

When the second game title in the series was launched a couple of year ago, fans felt that it had pretty much the same feeling and setting as the original game. However Gears of War 2 was still fun to play all because of its intense action and co-op.

With Gears of War, should fans of the franchise expect the same thing? Lets find out the complete details in this regard in our Gears of War 3 review.

Gears of War 3 event take place eighteen months after the fall of Jacinto and the defeat of the Locusts. A new threat has emerged from nowhere, and this time its “Lambent”.

Lambent is infected by Imulsion and have begin emerging from underground and threaten to completely destroy humanity from the universe. Marcus has no idea on how to eliminate this new threat, and soon he receive a message from Chairman Prescott, informing him that his father, Adam Fenix is alive and has the key to solving the problem that they now face.

Marcus, DOM and rest of the COGs now has the objective of finding Adam Fenix. In order to achieve their objective they all must travel together but what would be the cost of their success if or they eliminate the Lambent threat?, this is left to you to find out.

Epic Games has done a great job of mixing the game story with action, drama and suspense. The ending of the epic trilogy is very much satisfying.

With the launch of first Gears of War title, the third person shooter games have been revolutionized, all thanks to the mixture of combat system and third person action. Now coming to Gears of War 3 combat system, its pretty much similar to previous game in the franchise but many new enhancements for example, ability to perform different executions for every weapon used.

AI of the enemies is smarter than previous games, and this make Gears of War more challenging especially in insane mode.

Gears of War 3 multiplayer has a new feature, and it is the Beast mode. In this new mode, players play as a Locust or a Lambent instead of playing Marcus, Dom, Anya or any other COG characters. The main objective of gamers in this new mode is to take down the human characters.

The mechanics in this mode is very much similar to Horde mode expect gamers play as the enemy. Considering the fun factor in this mode, its pretty enjoyable and additive. Gears of War 3 Beast mode is such a feature that fans will be playing for months or years.

Gears of War 3 Four Player Co-op is for all those who love playing the game with friends. Fans of the game can expect mayhem and chaos of top level. In this four player online co-op whenever one of the team members gets knockdown on the floor, any of the other three players in the team can revive them. The best part is that there’s no limit as to how many times gamers will have to go down on the floor before they die. As long as other team members are there to revive the downed character within a specific time limit, they can revive them.

There is lot more for players who just love playing co-op. In addition to the campaign mode there’s another mode called “Arcade mode”. While going through the lengthy campaign of Gears of War 3, players can set the game in arcade mode where they will have to ability to enable modifiers such as “No AMMO Pick Up”. Players can compete with their friends by reaching a high score at the end of a particular chapter. The more the kill, the more points players get in the team.

Graphical and Visual wise, Gears of War 3 is simply marvelous. Gears of War 3 is definitely the most beautifully made third person shooter of current generation. Epic has made good use of lighting, shadow and much crispier character models. For more details on how good the game is in terms of graphics, you simply have to experience it by yourself.

There is no doubt that Gears of War 3 is the best Xbox 360 exclusive game of 2011. In my personal opinion, Gears of War 3 plays the same as the previous two games in the franchise, however the new additions made by developer such as new environments, enemies, weapons, and the new Beast mode are satisfying enough to make it stand on its own.

In short “Gears has never been as good as this one”…. SO GO FOR IT GUYS….