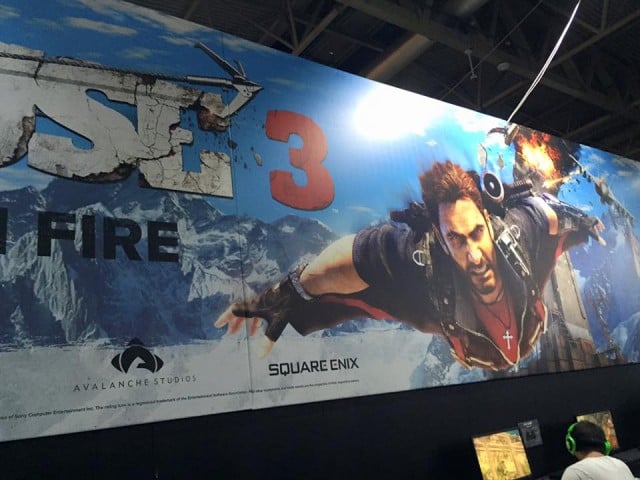 When arriving at the just cause 3 booth you are lead to an area where the developers explain the game and show a trailer showing the almost seemingly endless ways to destroy and liberate Medici. It was a tantalizing glimpse at what the next 20 mins had in store. The demo started with Rico overlooking an average sized village all was peaceful and the draw distance was immense. It seemed a shame I knew it wasn’t going to stay like this. I grappled at the nearest object and pulled myself at break neck speed and pressed Y on the pad (This was played on a PC with a controller or mouse and keyboard) Rico spread his arms and I started using the new wingsuit, I felt the immediate sense of speed as Rico just gracefully ploughed into the side of the cliff. I was going to be needing more than 20 minutes.

As I respawned it placed me closer to the village and I just about made it in I grappled a building and opened to parachute to get a better lay of the land, there was many objects in sight that needed to be destroyed to help free the people and I was going to do this in style.

In front of me was a speaker probably spouting some nonsense, I felt the need to help my people! I tethered the ground to the speaker and pressed LT and watched as physics made itself known with the speakers toppled in a rather destructive way. Your move Di Rivelo.

As I carried on moving through the town I changed to my rocket launcher as I noticed a small military base. As I flew past I fired a salvo of missiles at the base, all while parachuting and staying mobile. I noticed a guard on the ground and grappled him – I closed my parachute and started flying at him with a boot to his face – Freedom. All of this was going off and the controls held up – this was good to see as Just cause 2 had some very off controls.

As I worked my way out of the base I noticed a very, very large base just off the main island. I had to investigate and opened my wingsuit and flew to the base. As I entered the airspace I was fired at with AA and missiles and I was blown into the ocean.

As I got out of the water I noticed some oil tanks to one side, C4! I placed one on the tanker and stood back as I watched it go up in flames. C4 is now unlimited with the only limit being you can only place 3 at one time.

At this point I proceeded to blow everything up. There was some huge radio antennas which I stood in and placed some C4 inside, grappled and wing-suited out of the dish and watched my handiwork as I back flipped in mid-air…….and landed back in the C4 riddled dish. The resulting explosion was impressive and disastrous. The enemies then called in reinforcements – 3 helicopters. One I destroyed with missiles. The other I grappled onto the underside of the helicopter and let his buddies destroy themselves and the 3rd I grappled a slab of concrete at his face!

The freedom to just complete the objects with was staggering and all the systems just come together to make it a really rewarding cohesive experience that I definitely want to try again the multiple tethers, the coil ability and the wingsuit just fit the universe perfectly. All of this with some of the best graphics on show and 400 square miles of pure mayhem awaits.