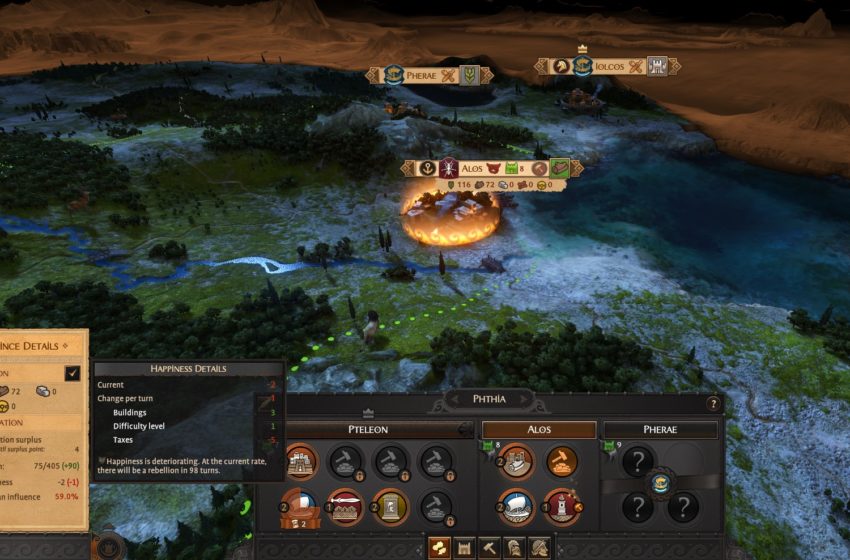 Every province under your control in A Total War Saga: Troy will have a happiness score. The happier the citizens of a province, the easier it is to keep a province under control. Should a province’s happiness become too cynical, you may have to deal with an uprising that begins in that area and defeat it. The uprising army can potentially take over the province and turn it into a small faction if you leave it unchecked.

How to view province happiness

You can view any province’s happiness by clicking on the area and investigate the province details pop-up on the lower-left portion of your UI. The happiness portion is underneath the province’s growth and your faction’s influence on the populace.

Unless something tragic happens, most provinces and regions you start with during your campaign should be relatively content. You primarily have to worry about a province’s happiness after capturing it from another faction. You can choose to occupy it rather than raze or sack the location.

How to improve province happiness

There are direct ways you can improve a province’s happiness, especially after recently conquering it. Here are several ways to increase happiness:

The other factors likely negatively impacting a province’s happiness include citizen instability and taxes. Almost all provinces provide your faction with taxes. You can choose to increase taxes to receive more resources, but it decreases happiness. Alternatively, you can pick to stop receiving taxes to increase a happiness score.