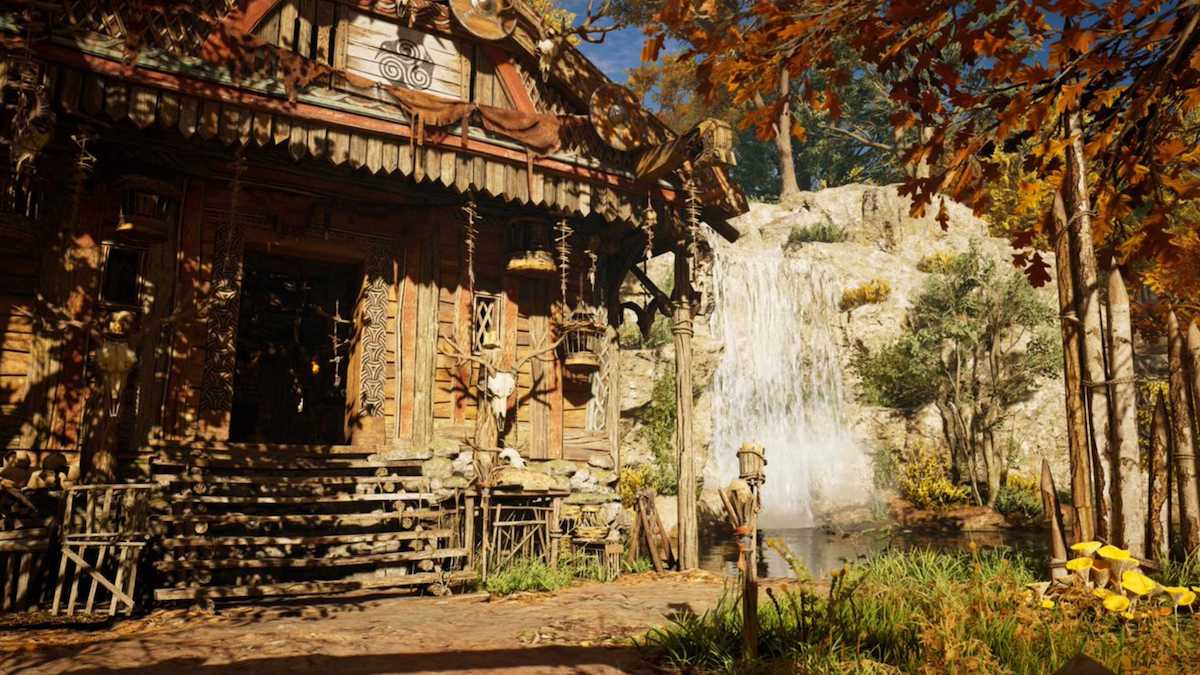 As you build your settlement in Assassin’s Creed Valhalla, you will eventually have to make a home for Valka, the Seer of your community. In doing so, you will unlock access to both mythical realms of Asgard and Jotunheim, areas that are involved with several different quests.

Going Deeper is the name of one such quest, and it involves you finding the ingredients that Valka needs in order for you to get to Jotunheim. Finding these ingredients requires you to travel to Cent, where you will have to complete the Cavern of Trials and bring these back to Valka. Once the potion is brewed, you can drink it to travel to Jotunheim. That’s provided that you drink the proper one, which is something that many players have had issues with.

Completing the Cavern of Trials

The Cavern of Trials can be found in Cent, near the eastern coast. It is west of the eastern-most Synchronization Point in the area. At the quest marker, you will find an old abandoned house. Head inside and you will find a hole in the floor with a ladder leading down. This is the entrance.

Go down the ladder and through the crawlspace behind some breakable objects. Move and slide forward down the slope in front of you. You are now in the challenge until you complete it.

You will see a note on a box in front of you that will vaguely explain the challenge. Jump across the small ledges in front of you and you will notice a key hanging from the ceiling after the second ledge. You will have to jump and quickly grab the key as you pass it.

It’s not too hard; it just requires some good timing. This will unlock the door in front of you.

Unlock the door and go through, using the wooden beam to jump to the ledge in front of you, where you will find your first Fireweed.

Now jump down to the next ledge in front of you; vault over the rock in your way and you will see another Fireweed in front of you with some ore deposits you can break.

You will see some rope leading out to the rocks in front of you. Walk across the ropes, following the path until it leads you to a ledge with two St. John’s Wort on it.

Now go out onto the next section of rope, climbing up onto stalactite it connects with. This will let you climb up onto another rope. On the rope, turn to your right to see another key hanging from the ceiling.

Again, you will need to jump and grab it in the air, landing on the stalagmite below you.

Go back to the room with the very first Fireweed in it and look down and to the left. You will see a rope you can jump to, then a wooden beam, and finally a door to go through. This will lead you to a chamber with a wooden beam and a wooden platform you can jump across.

In the next room, you’ll find some more Fireweed and St. John’s Wort, which will take care of what you need for Valka — but you still need to finish the cavern.

Go up the stairs here and keep moving forward until you reach a room with a rope going across and another key hanging from the ceiling. You know the drill: jump across and grab the key, landing on the staircase ahead of you.

Go up the stairs and keep going until you reach a moveable rock. Moving it will reveal an opening into the room with the first Fireweed again, along with some more rope to jump across to your left, leading to another door.

Head down through here to a room with wooden platforms and a net full of boxes hanging in front of you.

Use your bow to shoot the net down, making room to jump across to the next platform. Go forward and shoot down the next net as well.

You will come to a wooden platform above some ore deposits. On your left is a ladder that you can shoot down with your bow, leading up to a platform and another key hanging between some rope.

Go around the giant stalagmite and open the door you come across, and the one after it, then loot the chest for a Nickel Ingot. You can hear sounds from outside, but you’re not quite free yet.

Open the next door after the chest and keep moving forward until you reach a room with another moveable rock.

This section is really quite simple. The rock in front of you doesn’t need to be moved at all; just climb up onto it and use it to jump into the next open area, where you will find another moveable rock. You will have to move this rock to the other side of the area in order to jump over some more stalagmites, followed by another area where you will need to do the same.

You will reach a set of stairs that will lead you up to a locked door. Luckily, the key is hanging from the ceiling, just to your left. Climb onto the rock right there to grab it, along with a Treasure of Britain.

Unlock the door and follow the path it leads until you come to the exit and some more ore deposits. Now, it’s time to brew the potion.

This is the easy part. Just bring the ingredients back to Valka at Ravensthorpe and speak with her. This will trigger a short cutscene where she will brew the potion. When it’s done, the potion will be ready for you to drink and head to Jotunheim.

Reports of a bug

There have been many players reporting that a bug occurs during the quest — but really, it’s a matter of the game lacking some clarity and players being confused.

When you are given control of Eivor again, you will see a dot appear in front of you, showing you something that you can interact with. Naturally, players are assuming this is the potion that Valka just brewed for them; however, this is actually the potion for Asgard.

When players drink this, it sends them to Asgard instead, where they don’t have any quests to take on and can’t take the door to Jotunheim. Thus, they thought the game had a bug, when in actuality, they just took the wrong one.

The potion for Jotunheim is actually to the right of this potion. The Asgard potion has a much brighter green color to it, while the one for Jotunheim is darker and bluer. Plus, the Asgard one will be labeled as such if you take a moment after you walk up to it. Unfortunately, the game doesn’t compensate for the hastiness of its players, which has resulted in this issue.

Nonetheless though, there is no bug at this moment and taking the potion on the right will send you to Jotunheim for that section of the game.