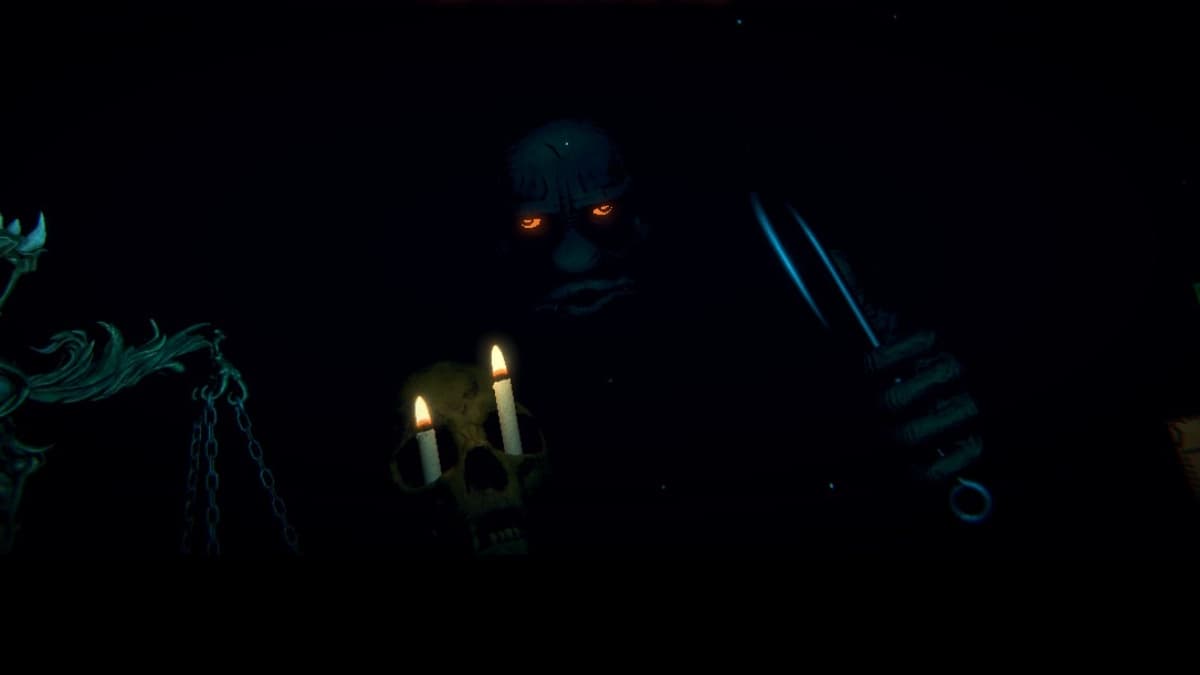 After a run or two, you will soon find yourself breezing past the pesky Prospector without issue. However, the second boss in Act 1 — the Angler — might prove troublesome if you don’t respect his unique mechanics. However, armed with knowledge about his skillset and some thoughtful preparation in the areas before the battle, you will defeat this fish-loving foe with no problem.

The approach and exploring the cabin

You can win the battle with the Angler before he points his creepy hook in your direction if you have thoroughly explored the cabin. In particular, you will want to complete the sliding puzzles to obtain the squirrel totem topper.

With this key ingredient, the difficulty of each run significantly drops, so long as you find the right components along the way. Once you have begun your journey through the map, look for any Woodcarver squares and prioritize them until you get the ideal totem body. The symbol for the Woodcarver is a raven’s head with a knife cutting away its lower half.

During these encounters, you are looking for a body that contains a Hoarder sigil, which looks like a magnifying glass. By combining this with the squirrel topper — which you will always have once after completing the sliding puzzles — you will be able to search your entire deck and add one card to your hand whenever you play a squirrel.

There are two huge benefits to this. Firstly, you no longer have to choose between drawing from your main or side deck since you will essentially be pulling a card from both each turn. Secondly, you can draw your most powerful card on the first turn and immediately defeat your opponent if the card has enough attack damage and doesn’t cost much to play.

Both of these conditions are in your hands too. Aside from focusing on Woodcarver encounters, visit every Campfire and Sacrificial Altar to power up your chosen card. The Stoat is a good choice since it only requires one sacrifice to play, but a low-cost Death Card is a better option if you happen to stumble across one. There is no drawback to heavily investing in one card since you are guaranteed to draw it on your first turn.

But if RNG isn’t on your side, you might have to be a bit more cautious with the Angler during both phases of his boss battle. The first predominately plays out normally, except you will need to consider the Angler’s fishing hook.

Occasionally, he will hover it over one of your cards to pull it to his side of the field. Naturally, you don’t want him stealing your most powerful cards, so you will need to manipulate his desire for “fresh fish.” The Angler will switch focus to the card you most recently played, so make sure it’s harmless, such as a squirrel or a pelt.

The old bait and switch

If you stick to that approach, you will reach the second phase and be halfway to defeating the Angler in no time. The later part of the battle is either tricky or no issue whatsoever, depending on the deck you have assembled.

After the scales reset, the Angler will replace any cards on his side of the field with Bait Buckets. These cards have no attack and one health but a troublesome ability. Once destroyed, a Great White with four attack, two health, and the Waterborne sigil appears. It’s this ability that makes the sharks tricky to deal with since they will become untargetable during your turn.

However, the upside is that when they are hiding underwater, you can attack your opponent directly. So, if your damage output is higher than the Angler’s, you can quickly defeat him. However, with four attack, these sharks can likely quickly dispatch any of your cards, so this is a risky tactic. Alternatively, if you have cards with the Airborne sigil, they will not trigger the effects of the Bait Bucket as they attack directly. If your deck is loaded with these types of cards, it is a much safer route to victory, and you might consider sacrificing any powerful cards on the field for them to avoid summoning the Great Whites.

And that takes care of the Angler. After mastering the Wetlands, you will move on to the Snow Line, home to the third boss of Act 1 and a former acquaintance, the Trapper.