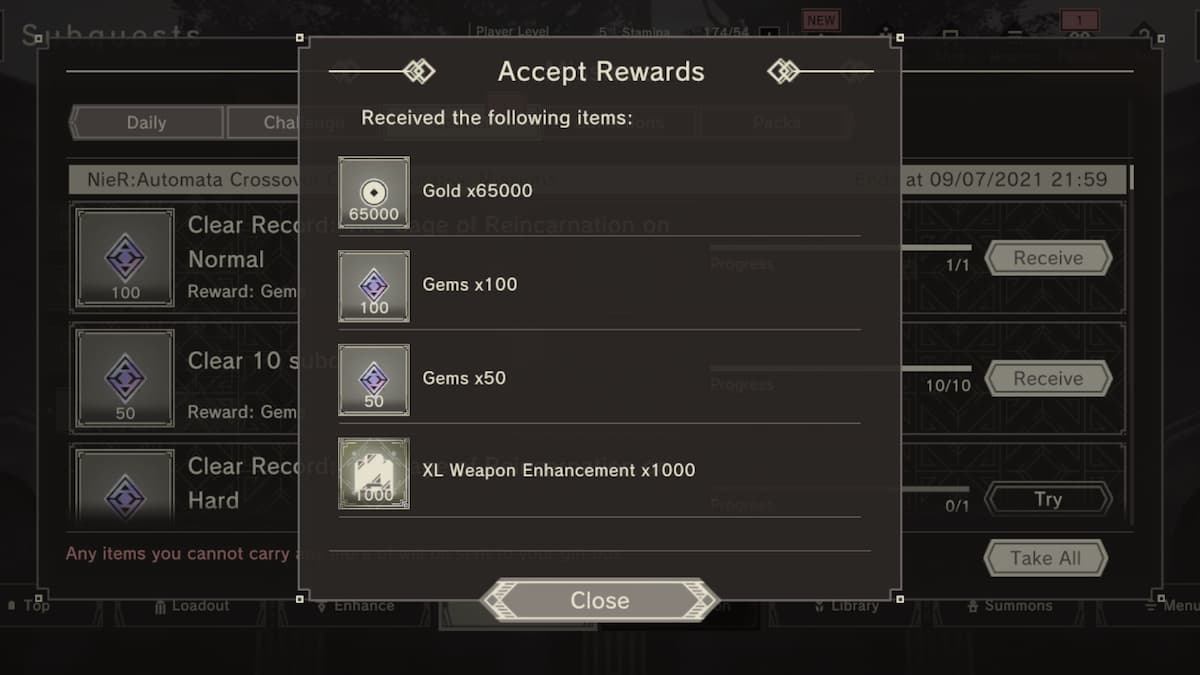 In Nier Reincarnation, gold is one of the main resources in the game, used in small amounts for almost all upgrades and enhancements. As such, you’ll go through a lot of it. Here’s our guide to the best methods for getting more gold:

The most repeatable, reliable way to farm for gold is by repeating story quests. Go back and complete the highest difficulty of story quests you can until you run out of stamina, and you’ll end up with a nice chunk of change. We recommend doing this only when you’ve exhausted all forms of subquests but still need more gold. Most likely, you would use this method if you needed a little bit more gold to complete an enhancement so you can go through a higher difficulty of a subquest.

Another more efficient way to get gold is by completing subquests, which are available in a room to the left of the main story door in Mama’s chambers. These missions, especially Daily Quests and Guerilla Quests, sometimes give a respectable amount of gold. The real moneymakers, however, are event quests, which often reward event tickets you can use to roll for summons. How does that get you gold? We’ll explain in the next section.

The best way to get gold is by selling excessive weapons, which is dependent on completing subquests and challenges to get gems and summon tickets. When summoning, you’ll end up with mountains of 1 and 2-star weapons that have only one use: to be sold in order to fund your enhancements. To sell them, go to the weapons tab, and click on the button in the top right that switches from “list” to “sell.” From here, you can select the weapons you want to sell — we prefer to use the “auto-select” option on the bottom left. You’ll see in the screenshot above that these 20 weapons sell for about 40,000 gold.

Selling Silver Coins and other items

A last note on how to get gold is that some items, notably Silver Coins, have no use except to be sold for gold. Silver Coins drop too infrequently and sell for too little to be a reliable farming method, but in a pinch, you can check to see if you have any unsold. Use the method from the selling weapons section above, but check under the “OTHER” tab instead of the weapons tab.

Using these methods, you should be able to readily procure a lot of gold, but it’s worth bearing in mind that “a lot” is relative, and we would advise you not to farm for gold because it is generally more abundant than all other upgrade materials.