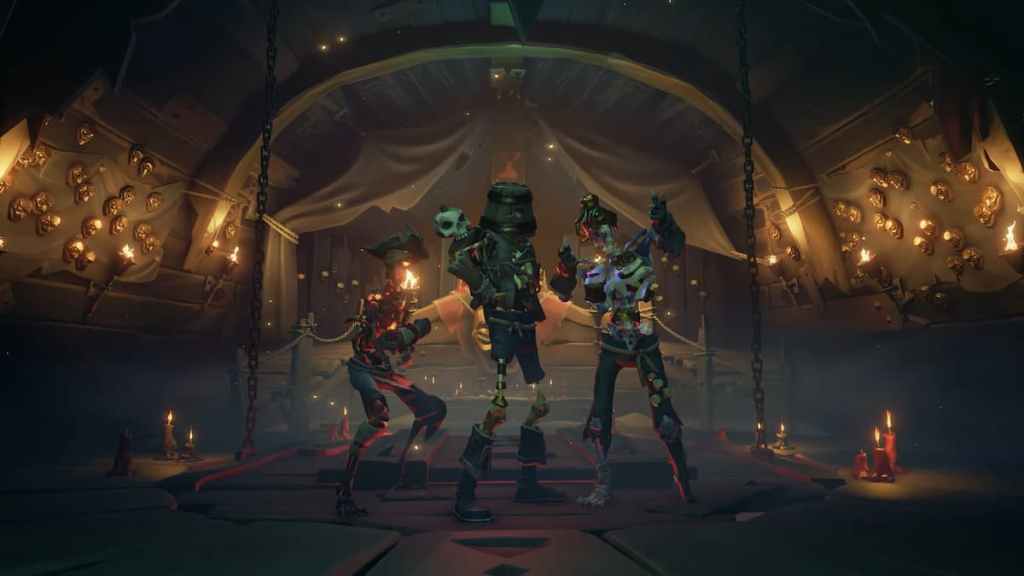 If you’ve been battling it out as a Servant of the Flame for Sea of Thieves, you’re likely on your way to earning probably the most unique curse in Rare’s pirate game. The Skeleton Curse will transform your entire body into nothing but bones, which appears to align with Flameheart’s true vision of what a pirate’s life should be in the Sea of Thieves. You’ll have to partake in the Ritual of the Flame in order to earn the Skeleton Curse — here’s where and how.

Ritual of the Flame location in Sea of Thieves

First off, note the requirements for earning the Skeleton Curse in Sea of Thieves. Once you’ve reached the max Reputation level of 75 with Reaper’s Bones and are at least Allegiance Level 100 for the Servants of the Flame Faction. You’ll be able to enter the Reaper’s Lair by playing “Who Shall Not Be Returning” at The Reaper’s Hideout when standing on the elevator in the tent.

Once you lower down into the Reaper’s Lair, go through the winding path, jumping over the gaps until you reach a larger, circular central area. Cross the wooden bridge and continue forward, following a minecart track. Once the path splits and you see a skeleton with a pickaxe, take a right and follow the wooden plank path. It will wind left and right, and shortly after, you’ll see a tall, open area with the Tree of Rebirth towering over you.

Ahead is an NPC named the Voice of the Flame, and behind them is Flameheart’s coffin. Stand on the Reaper’s Bones symbol — you’ll be given a prompt to “Kneel to begin Ritual of the Flame.” Activate it and sit back and enjoy the cutscene; the Skeleton Curse is yours afterward. Keep in mind that there are Commodations linked to undergoing the Ritual or witnessing other players go through it.

What cosmetics can you equip with the Skeleton Curse?

You’ll start off as a naked Skeleton, and note that you cannot equip your existing clothes and cosmetics to the Skeleton Curse. Instead, you can earn, buy, and equip unique cosmetics as a Skeleton from the Bonesmith in the Reaper’s Lair.