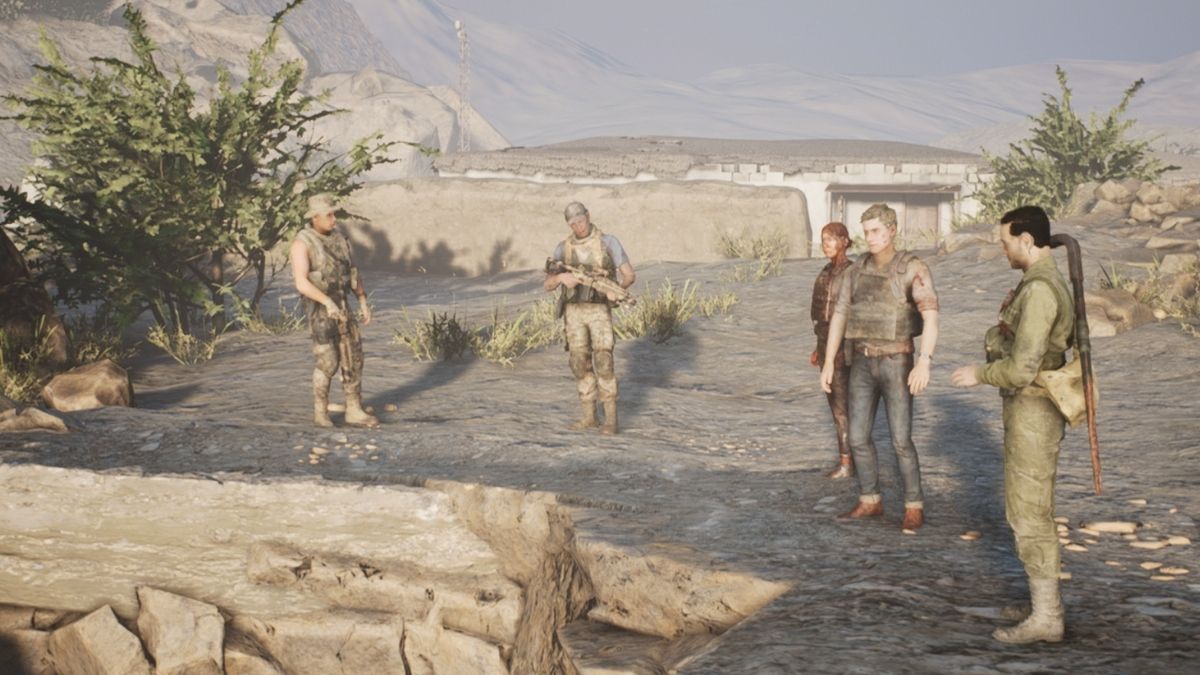 The biggest accomplishment in The Dark Pictures Anthology: House of Ashes is getting everyone out alive. To do so, you need to bypass many deadly scenarios and avoid dangerous pitfalls. Finding the right sequence of events and choosing the right actions are critical for the survival of the team. Are you prepared? We are going to break it down chapter by chapter.

During the briefing, Eric will be asked whether he wants to bring in air support for the raid. Call in air support. Doing this will make it so the air support hears you on the radio later in the story. Helicopters will also show up during the game’s finale sequence and help the survivors.

After things go south and enemy soldiers start firing on the team, Jason will have the opportunity to shoot one of the shepherds from the raid. Do not shoot the shepherd. Shooting the shepherd will cause Salim to have a poor relationship with Jason.

Right after the world caves in and everyone becomes trapped, Jason and Nick will find Merwin hanging by barbed wire. Help Merwin survive. This takes place over multiple chapters. Do the following to keep him alive.

Doing all of this will allow Merwin to fix the radio later in the story so the team can call for air support.

During this chapter, Rachel and Eric will be running from Dar. As they make their escape, Rachel falls down a hill. She grabs a rope Eric tosses to her but he can’t hold her and falls down the hill. Faced with a choice to hang on or cut the rope, Eric should cut the rope. This will cause Rachel to fall but Eric will live (Rachel falls no matter what anyway).

Successfully complete all the QTEs as Salim when the creature attacks. This is the same creature that had a truck land on it. Completing all of the QTEs will result in Salim learning the creature’s weakness and killing the creature with a metal pipe.

After everyone has regrouped back at the temple. The team will hear Joey screaming. Choose to have Joey go with Nick instead of Eric. This will help when confronting Salim and he will lower his guard. After Nick and Jason depart, they will come across a pool of blood. Follow the path and go down a dark tunnel to find Joey’s medkit. This will allow Nick to patch up Salim later in the story.

During this chapter, Salim will meet up with Nick. Have Nick go along with Salim’s plan and the two of them will sneak past the nearby creature and then kill it. Afterward, tell Salim that Nick’s friends won’t hurt him. This will make Salim lower his guard and he will be brought back to the temple along with the dead creature.

You will discover that Rachel is still alive. You will take control of her down in the blood-filled pit. After a while, she will run into Clarice. It turns out Clarice has been infected by the creatures. When the choice comes, choose to abandon Clarice so she can’t kill anyone in the temple. She will reappear later.

During this chapter, Nick and Jason will enter the catacombs. Look around for a dead body with a stake driven into it. Examine the stake and keep it on you. It will be used later.

The team will be under attack by several creatures inside the temple. Rachel will be given the choice to run or use the machine gun. Use the machine gun and take out some creatures. Later on, you won’t need to remember where the explosives were placed.

After the team escapes the temple, they will enter the catacombs. More creatures will come and another fight will happen with a lot of QTEs and choices. Make these choices:

During the Strange Aeons chapter, Rachel will show signs of turning after being infected by one of the creatures during a previous chapter. She will grab the white phosphorus and hold up her knife. Do not knife the white phosphorus. After Nick and Eric grab her, tell Jason not to shoot. After Salim makes the suggestion to use the cocoons to keep her alive, accept it. This will lead to Eric using the UV wand to expel Rachel’s infection.

Nick has decided to place the bombs and blow the creatures up. Don’t fail the QTEs in this part and when making the choice whether to advance or retreat, advance forward. Succeed at the rest of the QTEs and Nick will be okay. While everyone is escaping, Salim will get separated from the group. Have Jason go back for him.

Daylight is the final chapter. Once everyone gets out of the caves, a solar eclipse will happen and the creatures will emerge from underground. A long QTE sequence will start. Do your best not to fail too many of the QTEs or characters will start dying.