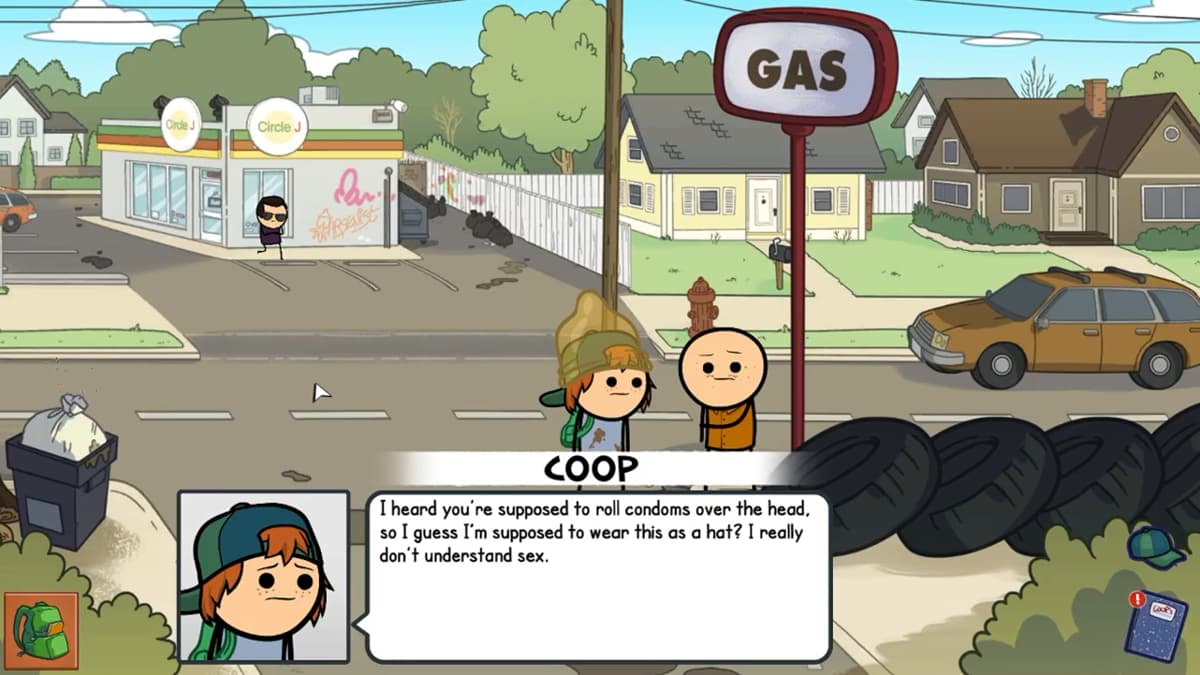 As you play through Cyanide & Happiness – Freakpocalypse, you will meet various interesting characters, as you would expect with anything set in the Cyanide & Happiness universe. Wherever you look, you will find at least someone who is a little suspect, either for their actions or how they look. After you leave high school in the early portions of the game, you will be walking towards home and come across a side quest with an odd request from a creepy guy named Jimmy Hatt. He wants you to grab some condoms for him because prom is coming up. While we have suspicions about Jimmy’s character, Coop only wants to help people out, so here is how to steal the condoms for him and complete the Condom Conundrum side quest.

As you walk on the street towards Coop’s house, you will come across a convenience store called Circle J. Across the street is Jimmy Hatt. Talk to him and have him tell you about his devious plot, which includes extra-thick condoms for prom. Choose the conversation option “How can I help?” and Jimmy will give you $1.14.

Now that you have the money, walk into Circle J. You will notice Curt Livingston, the Pyrofox from the Cyanide & Happiness short animations, is the cashier here. If you ask for condoms, he will tell you he cannot sell condoms to underage kids anymore. Instead, we are going to steal them. On the left endcap in front of the store’s entrance, you will see a box that says Midas. These are the condoms you need. Grab them to have Coop put them in his backpack.

If you try to leave the store, though, Curt will know you’re trying to steal them, and you will leave empty-handed. Instead, we need to hide the condoms in something else and buy that item. In the back right of the store is a Super Slurper machine. Grab one of the cups below the machine, and Coop will add it to his inventory. You need to combine the cup with the condoms to make them a singular item. To do this, drag and drop one over the other.

With the condoms in the cup, use the cup on the Slurper machine to fill it with the beverage. Use the now filled cup of Super Slurper on Curt, and you will automatically pay for the cup.

Head outside and use the Slurper cup on Jimmy to will complete the side quest. As a reward, Jimmy will give you one of the condoms, which you can put on your head (not that one) as a hat.