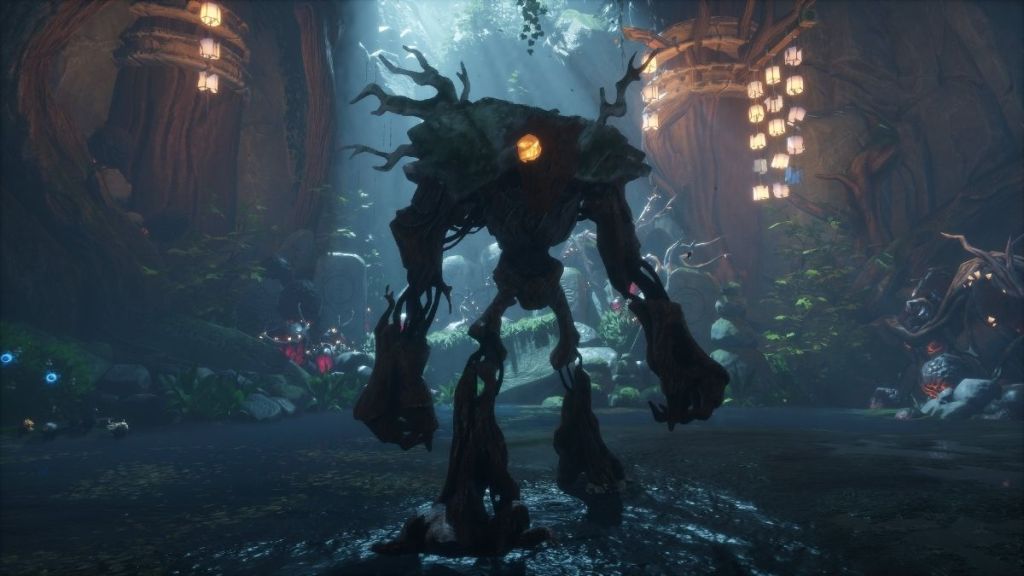 You’ve finally reached the end of the Forgotten Forest, and there is one boss left here; the Shrine Guardian. This boss fight takes place in the Lantern Caves and is one of the more lengthy fights in the game. While the boss isn’t too difficult by himself, he is more dangerous thanks to many enemies that spawn nonstop. Here are tips on how to defeat him.

The Shrine Guardian will start the fight by summoning some of his pals, five to be exact. You can try to take them out, but they will constantly spawn in during the battle.

The Shrine Guardian only has a couple of attacks, but they can be very deadly. Luckily, they are easy to see coming. The first you’ll have to worry about is the swipe attack. It has a long reach but can easily be dodged by rolling forward or backward. The Shrine Guardian will sometimes jump into the air to do a large slam. Be careful when dodging this attack because it does area of effect damage. If you focus on melee attacks, the boss will occasionally stomp his foot down. This is another area of effect attack.

The Shrine Guardian’s last attack comes in the form of a ranged attack. It’s hard to see when this attack is coming, but it happens when he digs his hands into the ground. This attack causes pink tendrils to pop out of the ground and cause area of effect damage.

Tips to defeat the Shrine Guardian

There are a few things you can do to easily defeat the Shrine Guardian. First of all, don’t worry too much about the smaller enemies. They are easy to avoid in the large room, and the boss can damage them with his attacks. They take care of themselves pretty easily, but if you think they are too much, take them out before going after the boss.

The Shrine Guardian has three yellow shards on his body. Shooting these with your bow will cause a lot of damage. Take them out quickly. If the boss uses his tendril attack, there is an opening to strike him. If you have the Rot Spirit Actions built up, you can make the Rot Spirits swarm the corrupted orb on the boss’ back. Shoot with your bow to destroy it and deal a lot of damage.