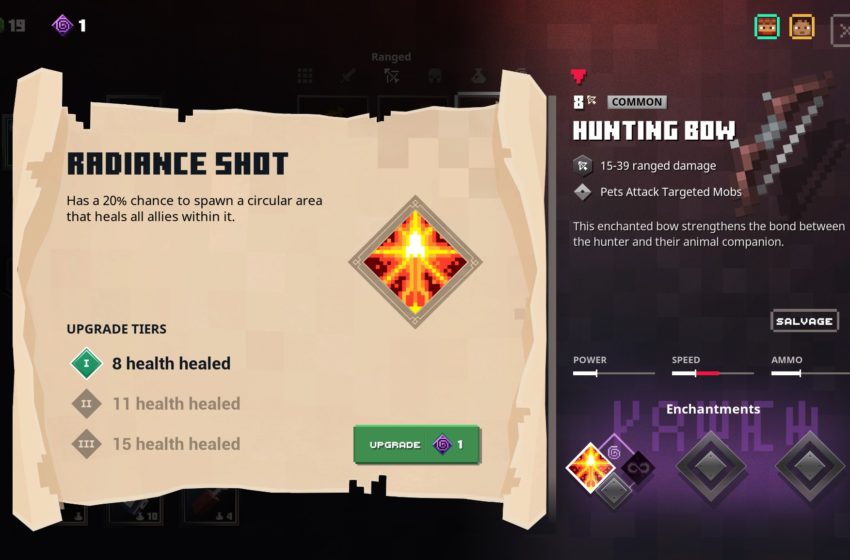 You will find yourself looting plenty of useful armor pieces and weapons in Minecraft Dungeons. Many of them will feel the same, such as you will discover a variety of swords, great hammers, bows, and similar armor types as you explore the game. What sets them apart is the enchantments attached to them. The enchantments make them unique, and far more useful as you attempt to make your way through the game. These are some of the best enchantments you can find and use in the game.

There are enchantments for armor, melee weapons, and ranged weapons.

The enemies around you will have a slower attack and movement speed, and the blast radiates from you every two seconds. It’s a powerful armor ability, allowing you to close the distance and openly attack enemies without fear of being hit back. It does not prevent the creepers’ exploding timers, though.

The protection enchantment lowers the amount of damage you receive with each upgrade. It’s not incredibly powerful, but it’s a substantial damage reduction for anyone looking to worry less about their health while exploring the game.

All of your artifacts will activate when you reach 25 percent of your health, regardless of their cooldown. If you have certain ones, such as the soul healer, totem of regeneration, or wind horn, this enchantment uses them all at once, likely giving you a massive boost of health or clearing out the foes nearby. It’s handy in any number of encounters.

Snowball is not the most powerful of enchantments, but it’s beneficial when you begin fighting vast mobs of enemies. It fires a snowball at nearby enemies, stunning them for a few seconds. The first upgrade only has this effect happening every five seconds, but you can enchant it to happen every second, making it easier to fight the big mobs chasing you.

The Critical Hits enchantment increases the number of chances you have for a critical hit to trigger. For those who have a high attack speed item, you want to turn this up to the highest upgrade to have a 20 percent chance of a critical hit to happen, and when it does happen you will do triple damage.

At the end of your weapon’s combo, you release a gust of wind damaging any enemy nearby you. You want to attach this to the weapons that have quicker combos, such as the sickles, daggers, or gauntlets. These weapons do not have the best range, making them even better choices.

At the end of a combo, your weapon will release a powerful wave of healing energy healing your allies nearby. It’s a great enchantment to have, especially for those who play with other players. You want to find ways to try healing everyone find your party as often as possible.

Need to keep your enemies close together and in one place? Every few hits, chains link enemies together and prevent them from moving until the effect wears off. When chains happen, you can easily weave between enemies and hit the stronger, more difficult ones and wait for the others to chase after you.

When the arrow hits an enemy with this enchantment, other mobs around it will be pulled into the shot and remain there. The duration of this effect goes from 1 second, to 1.5, and then to 2 depending on how many points are in the bow. It’s a great way to ensure mobs cluster together, giving you a chance to damage them with melee or run away.

The arrow you fire out, every third, second, or every shot depending on how many enchantments point you place into the bow, hits the enemy, and then goes past it to hit others behind it. It does not add any damage to your bow, but using this alongside other enchantments, such as fuse shot, chain reaction, or gravity, can create a devastating combo.

Fuse shot will fire out an arrow that attaches to a target and explodes, doing 100 percent damage to nearby mobs from the target. It happens every fifth, fourth, or third shot, depending on how many enchantments you place on the bow. It’s a great way to clear multiple enemies, and it does additional damage to your primary target.

With chain reaction, you have a chance for the arrow the explode on the target and explode into five different arrows. These arrows project out from the target and can potentially hit other targets around it. It’s an excellent enchantment towards the end of the game where mobs of enemies cluster close to one another.