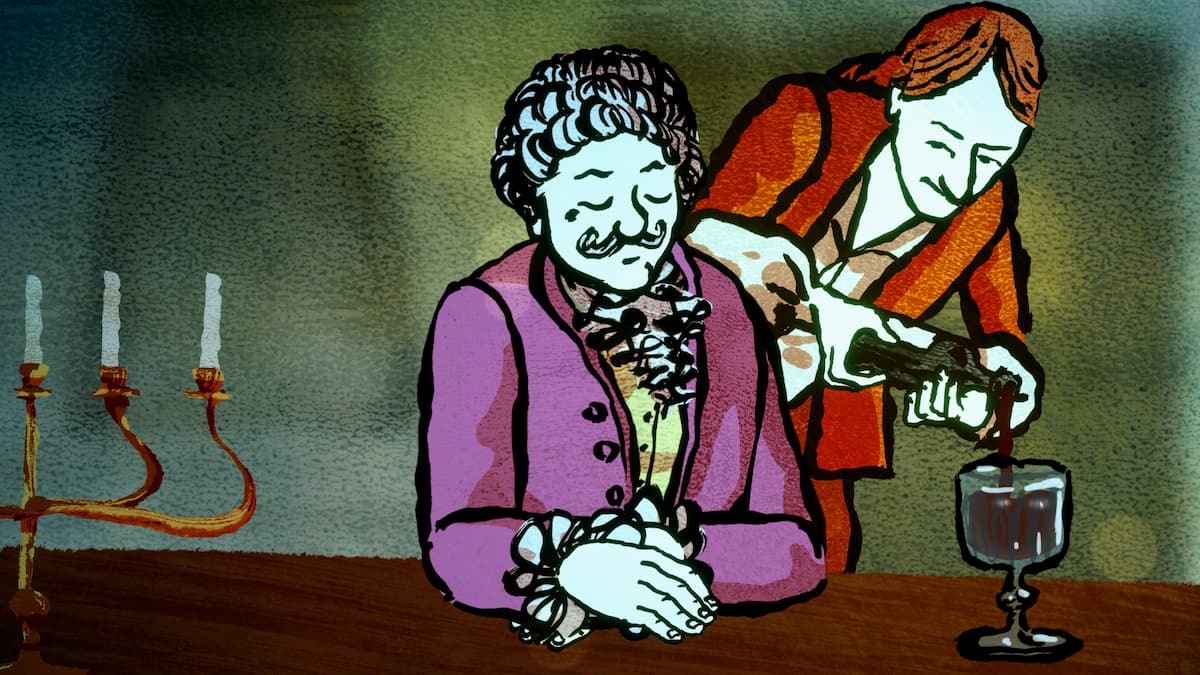 The player character begins Card Shark impoverished. A nameless mute, this young man earns pennies working tables in rural France. Taken under the wing of the real-life philosopher and trickster Comte de St-Germain, this young vagabond becomes a learned and expert con-man. Together, they’ll travel across 18th century France, cheat the wealthy out of their excess, and investigate a mystery that involves the heart of the aristocracy.

The game features, as the marketing touts, real card tricks. I don’t have the expertise to fully confirm or deny this claim, but they certainly feel real, requiring simulated sleight of hand, memorization, and constant learning and re-learning. The game uses a total of 28 tricks. Some are expansions and iterations on previous tricks, others bring in entirely new systems. It would be easy to characterize Card Shark as a mini-game collection, a set of separate games and ideas. This would be a mistake.

Cheating at cards builds out a language of play as comprehensive as any eight-hour game can be. Each “minigame” relies on memorization and problem-solving. In some exhilarating moments, unexpected wrinkles will appear in planned tricks, forcing you to rely on past knowledge to get through. There’s even a permanent death difficulty mode, letting you take your struggles and expertise to a simulative extreme. Because each of the scams relies on some common knowledge and a skill-set, almost every minigame is an expansion of a central idea.

Slight of mind, out of hand

As a result, Card Shark feels like almost nothing else I’ve played. Especially now, card games flood storefronts across the industry, but the cards here are more metaphor than practicality. Competitive games like Hearthstone or Runeterra might mimic physical games, but they lean on random effects that could only exist on the computer. Card-based rogue-likes reach even farther in digital abstraction. In contrast, Card Shark is obsessed with the physicality of cards. You will shuffle and crinkle and even paint cards in an effort to cheat your opponents. The actual play of gambling is entirely absent — instead, Card Shark is a montage of the motions and gestures that make up each individual scam. You are, after all, making your own luck.

On top of successfully managing each trick, there is a social layer. The less effective your sleight of hand, the more suspicious your opponent will become. Arouse their suspicion entirely and, well, they will accuse you of being a cheat, with possible imprisonment or death to follow. You can also enable opponents to win to lower suspicion, before fleecing them with an astronomical bet. If you pull off a trick effectively, you’ll be gone with their money before they suspect a thing. This outside layer gives variable stakes to something that could, and still sometimes can, be too formulaic.

If this sounds stressful, it can be! I frequently found myself pausing to catch my breath and remember what I had to do or reloading saves to try and paste over my clumsiness. While nothing in the game is particularly challenging, it does require your full attention, especially on higher difficulties. However, the game lets you consult guides in the pause menu and lends plenty of visual aids in the lower difficulties — though I would appreciate a more robust set of settings. For example, it would be fantastic for many players to customize the difficulty of timed button presses. What is here, though, is appreciated.

In-between tricks, co-developer Nerial shows off their interactive fiction roots. Each potential scam is associated with a location and specific characters. Earning money will let you raise the stakes on individual encounters, but it can also go toward the needy. The game’s “home base” is a Romani camp, where both the Comte and the protag can donate money to what we would now call a mutual aid fund. Donating will ingratiate yourself to the caravan, who can be your staunchest allies. However, donating too much can anger the Comte and leave you with no money to bet with.

The proper narrative choices are mostly a means of expression instead of narrative change. Rather than choosing a dialogue option, you choose a face accompanied by a word or a gesture. It is at once well-drawn and respectful. It lets the initially nameless protagonist have warmth and character without slighting or de-emphasizing his disability. He is also given tremendous personality with the game’s charming portraits.

It is difficult to understate how gorgeous Card Shark is. Co-developer Nicolai Troshinsky lends  his visual flourishes, giving this “digital card game” a vibrant, tactile aesthetic. The figures look like paper dolls, giving suggestive life with flat, evocative gestures. The music perfectly sets a mood. Played with live instruments, the music has a texture and space that lends three dimensions to the painted landscapes. Through the combination of aesthetic moves, hobnobbing with the french aristocracy feels appropriately bright, decayed, and melancholy.

While I’ve conjured a bright and jovial experience, Card Shark can swerve into dark corners. Anytime serious amounts of money are being exchanged, things can get serious. In contrast with an industry with deep ties to gambling, Card Shark never shies away from the dangers of risking one’s fortune. While the game makes some obvious narrative moves here, it always feels elegant and grounded. It never veers into cheap moralizing.

Card Shark is such a sharp idea, it’s hard to wonder why it hasn’t happened already — or if it has, why such a fun idea has been forgotten before now. Fortunately, it is more than “just” a sharp pitch for a game. Card Shark is a vibrant and exciting vision, at once complex and simple, the kind of indie sleeper hit that people on Twitter will be yelling about forever.