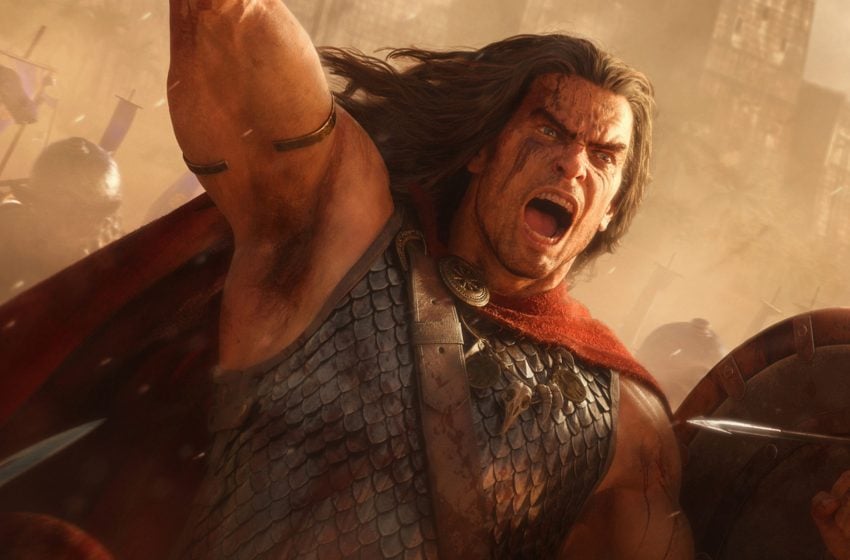 Conan stands at the center of my base. To all four compass points a series of defensive towers, walls, and traps takes care of my enemies. Javelin throwing troops send volley after volley into my enemies, and where the walls are broken, swordsmen fill the gaps with their bodies. Conan waits for the enemy he knows is coming. Just as the pressure on my defenses peaks, it appears. A giant spider. And I mean a giant spider. Not a large spider, or a big spider. A giant spider. Bigger than any building in my camp, it easily ignores my walls, and I send Conan straight towards it. Conan is my star player, my ace in the hole. He is my go to guy when the mistake I made preparing for my enemies becomes apparent and I need a healthy dose of ass kicking dished out to the people who keep knocking down my damn walls. Everything works as planned. My outer defenses stop most of the enemies, and the giant spider that made it through gets dealt with by Conan himself.

Conan Unconquered is simply not the game I imagined it would be. An interesting mix of tower defense concepts, real-time strategy, and resource management, it has a surprising depth and a weirdly rugged charm. Much like Conan, I guess. At times it feels like developers Petroglyph have been peering over my shoulder while I unwind at night. I have a strange thing for games that let me do a bit of planning, then sit back and watch as things happen. When I need to wind down my brain a little I like to fire up an RTS game, set it on easy, and just build a big army. I do all kinds of things with games that I am not supposed to. Heaven help me, sometimes I even use them to relax! Don’t tell anyone, as it will ruin the hardcore gamer image that I was never bothered to cultivate.

The overall aim of Conan Unconquered is to survive. You have a base, and every few minutes a wave of enemies will come and try to smash up your stuff. You can see which enemies will be coming, and in what numbers, for the most part. Once they start marching you can also see where they are coming from. In between waves is a frantic period of resource management. You need a lot of resources. You need people, wood, and gold. You need the souls of your enemies, and bricks. You need all these things to build defenses, fuel your dark magics, and train into people who can throw a stick pointy-end first.

Not all the resources you need will be in easy reach. Some will be quite far from your base, and you’ll need to build important buildings in dangerous places and then decide how you wish to defend them as well. Exploring the map is a good idea, although it is populated by beasts and monsters you will need to kill off to truly control your territory. It’s a huge help to know the routes that enemies are going to take so that you can funnel them into killzones. Conan Unconquered is a game that rewards keeping yourself busy, even if it is so good to relax with.

When the enemies arrive, it is surprisingly calm. Your defenses will hold up, or they won’t. You will destroy your enemies, or they will likely break one of your expensive buildings. Or a lot of them, depending on how foolishly you placed your poison bombs. Personally, I love poison bombs. An enemy steps on one, and a large cloud of toxic smoke pops up and melts him and his friends. Killing enemies in all sorts of ways that are banned under various Treaties is the real meat on the bones of Conan Unconquered.

Buildings give you the ability to build new buildings, and research new tech. Defensive towers are definitely in this season. They come in giant spear throwing, rocking throwing, fire throwing, and giant laser eye varieties. If I had to pick just one as my favorite, I couldn’t. The destruction they visit upon the people foolish enough to challenge the might of Conan is all wonderful, in each towers unique way.

Where my own defenses fall down a little is in the troop department. Upward mobility within the army of Conan isn’t really a concept. You throw spears, or stick swords in stuff. Some guys can ride horses, while others have bows. The final job is a sorcerer, casting dark incantations to draw forth eldritch forces. Your troops can gain experience, however. The can become veterans, more powerful versions of themselves, so treating them as cannon fodder is a mistake. This is a nice touch as it stops any desire you have to just throw bodies at the problems you face.

My enemies on the other hand have all sorts of stuff. Fire demons, giant spiders, big scorpions, and catapults that throw corpses at me. Corpses! I love it, but I can’t own it, which is a bit of a let down. While the overall diversity of defensive methods is pretty strong, covering traps, bombs, assorted towers, great big walls, sally ports, boiling oil, and my limited troop types. Oh! And the aspect of an ancient god I can call forth to smush my enemies. And he will absolutely smush the hell out of your enemies. Truthfully I like Conan Unconquered far more than I thought I would. It’s the game equivalent of a cold beer on a hot day, or whatever people drink on a cold day. It’s fun and relaxing, but not without issues.

Graphically, the game is a little rough around the edges. I actually like the art style in general, but my issue is exacerbated because I cannot change the resolution. I’m playing at 1080p on a 1440p monitor, because the game just will not let me change the resolution. I can click on it in the menu all day, but no dice. It feels like an easily fixable thing, so I assume it will be taken care of in a patch.

Unit pathing can also be a little bit punishing. The AI is not always the best at working out the best route to places. Clicking a destination and then ignoring those troops can be dangerous, and a certain amount of baby sitting is required. This is alleviated in the games co-op mode, as one person can look after troops while the other builds defenses, if you so wish. Still, what would really step Conan Unconquered up a notch would be some heavy duty macro play, but it just isn’t really that game. It hinges far more on building the right defenses, in the right place and at the the right time, than it does on the concept of delicate troops movement.

The campaign itself, while short, feels every so slightly awkward. There are not many missions, but they can be long. There is a level generator however, so if you are interested in quicker to eat slices of the game you can set the parameters to whatever suits you and just sit back and have fun. Mostly what Conan Unconquered lack is just a little bit of polish. None of the issues are game breaking, just mild slights against the enjoyment the game is trying to provide. I do worry that the lack of variety will be detrimental to a lot of people, but I personally enjoy what’s on offer, with no real need to have tiny mission variations mixing things up for me. For people who enjoy this type of game, the majority of their play time will be spent in the level generator, tweaking the challenge level to suit their own desires.

Conan Unconquered is an almost inherently silly idea, but it does work. It definitely scratches a specific itch I have had my whole life, to sit there with an isometric game and build weird things and watch them fight in a totally non-serious way. Conan Unconquered is a fight between a giant spider, and a fire demon, and a flame footed deity built of bronze. It’s not trying to be even remotely serious, and it’s all the more enjoyable because of that.

I’m actually enjoying Conan Unconquered enough where I would like to see more content for it. A mode where you get to be the attacking side would be great, making decisions on routes, troop types and other factors before sending your army off to fight Conan and his pals. It also feels like the type of game that would benefit hugely from a Battle Simulator mode. A simple thing where you get to throw hundreds of troops against each other and watch them all explode could be remarkable fun.

While it is certainly not perfect, it really is a lot of fun to play, and even if it doesn’t do anything ground breaking, it does what it does well enough to be worth your time, if you have been on the fence about the game. Conan Unconquered doesn’t set the world on fire, but there is a good chance it will set your base on fire, which is certainly a fun way to spend your time.

Disclaimer: This review was written using a review code provided by Funcom/Petroglyph.